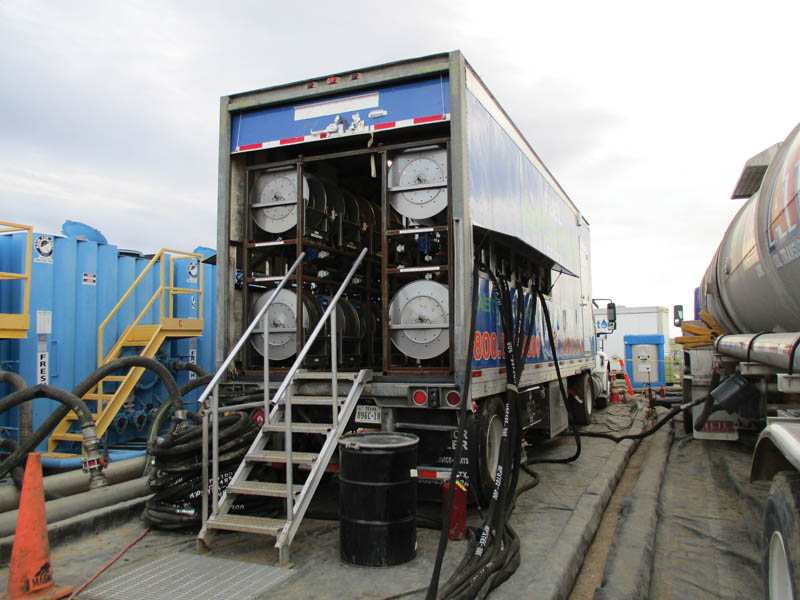 An oil field is a dangerous operation, especially in the so-called hot zone, where a collection of high-pressure pumping equipment, tanks, valves, and pipes supply crude directly to refineries, terminals, or fuel trucks.

At times, due to uneven pressure and other factors, oil fields experience operational downtime. To offset a temporary drop in supply, surface tanks help bridge the gap, especially at smaller rigs where oil is dispensed directly into fuel trucks.

But in the latter case, if supply can’t keep pace with demand, more and more fuel trucks wait in line until the oil can be dispensed more quickly. At other times, fuel truck drivers must enter a hot zone to reach supply lines.

To reduce the number of workers in a hot zone, along with greatly limiting the fluctuation of supply and boosting efficiency, Atlas Oil Co. in Taylor, working with a number of partners, developed the Fuel Automation Station. The mobile platform, slightly smaller than a conventional semitrailer pulled by a truck, contains 20 hoses that dispense oil simultaneously.

“You pull near the Fuel Automation Station, bring the hose to your truck, and it’s plug and play,” says Sam Simon, founder and chairman of Simon Group Holdings in Birmingham, which he formed in 1985 with the founding of Atlas Oil. “Inside (the station) you have all sorts of equipment to prevent any accidents, along with a small command center so that a worker can monitor everything via digital sensors.”

Already, four stations have been built and are in use today following 18 months of design and construction. More stations are in the works, driven, in part, by the rising use of domestic sources of oil, the result of rapid growth in fracking operations in recent years.

“We designed the station with lots of safety features, including a built-in fuel filtration system,” Simon says. “We also have sensors that prevent over-fueling, and it’s fire- and explosion-proof. Plus, it’s connected to the internet, so we designed a web and a mobile app to bring as much data as possible to our customers.”