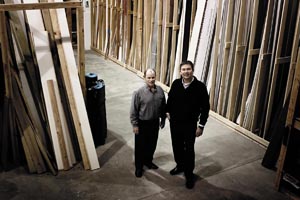 As owners of a disaster-restoration firm, Michael Graham and John Perini have come across their fair share of accidents. But not every rehab is cut-and-dried.

Case in point: After a large home in Oakland Township burned to the ground three years ago, the pair weren’t sure it could be rebuilt. “There were no building plans. All we had was a postcard picture and memories,” says Graham, co-owner of Maxim Construction Inc., in Sterling Heights. The home, complete with a backyard Japanese garden, was completed 13 months later.

Donna McMinn, and her husband, Robert VanCamp, say other builders tried to mimic the original four-bedroom, 2,600-square-foot home. “I wanted the kitchen exactly the way it was, but every builder but Maxim said they’d give us something nice,” McMinn says. “Well I didn’t want something nice; I wanted my kitchen back. Maxim got it done.”

Former insurance adjustors turned contractors, Graham and Perini have been witness to multiple misfortunes in their 20 years in business, along with peculiar personalities.

Their ability to manage stress has helped fuel steady revenue growth — up to 10 percent, on average, since 2007. “A person having a home built is under stress,” Perini says, “but a person having their home rebuilt as the result of fire, water, or wind damage is under a lot of stress.”

Maxim, which relies mostly on referrals, has developed several internal mechanisms to help homeowners and businesses recover from an accident or disaster. One is to avoid sugarcoating a rehabilitation. “We’re frank with people,” Graham says. “There will be some tough times, but we’ll get through it.”

Other assistance comes from Maxim’s operations manager, Christine Smith, who doubles as an interior decorator. “I’ll meet a homeowner to select tile, kitchen cabinets, fixtures, whatever is needed,” she says. “It helps people focus, plus it keeps everyone on schedule.”

Mother Nature plays a role in the firm’s success, as well. Maxim’s most active years were in 1999 and 2000, when a series of ice storms caused considerable damage in the region. High winds add another element of growth.