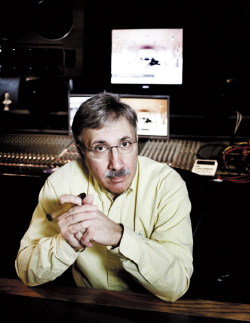 If the life story of Albert Einstein ever makes it to the silver screen, Dan Yessian should get some serious consideration for the part. A well-groomed doppelgänger of the famous physicist, Yessian can sum up his theory of business in one simple sentence: Don’t be afraid to diversify.

“Probably in the last 10 years, we started to diversify with everything,” says Yessian, 65, a one-time high-school English teacher and founder of the composing studio in Farmington Hills that bears his name. “Documentaries have always been a part of what we do, but now we’re going into film trailers, interactive — even into amusement parks.”

Yessian’s pre-recession strategy is working, to the tune of some $4 million in annual revenue on growth of 15 to 20 percent a year. “Here’s a guy who would be as excited working for a big national client as he would for a car dealer in the middle of Idaho,” says Ed Victor, former director of advertising for the Automotive Advertising Group.

Yessian has placed music in TV’s top-rated series, CSI. But his company’s biggest film exposure to date occurred last year when he, L.A. marketer Bob Saltzburg, and Detroit rocker Liz Larin wrote the song “I’ve Got the Magic in Me” for the movie Mostly Ghostly.

“We put in our bid for the music [on] a lark,” says Yessian, clutching one of his ubiquitous Montecristo cigars, “but it ended up as a nice little piece of business.” He expects the film to play every year around Halloween.

With a studio in New York, a satellite office in Frankfurt, a loft presence in L.A., and a postproduction studio in Royal Oak, Yessian’s professional connections run deep. Along with his son, Brian, 33 — the studio’s executive creative director — the company composed the music and sound design for a theater and battlefield walk for the Fort Siloso museum in Singapore.

The company also handled soundscapes for a Chicago museum and the new Toyota Engineering Theater at the Detroit Science Center, and is currently in the midst of several amusement park projects, including one at the Jurassic Park-style dinosaur theme park in Dubai, the 3-D Ferrari World in Abu Dhabi, a theme park in Shanghai, and a new project at Universal Studios Singapore based on the movie Shrek.

Meanwhile, Brian and his younger brother, Michael, the company’s head of production, are capably sharing the workload as the expansion into other industries continues. But that doesn’t mean their dad is contemplating retirement.

“The only way I’ll go is if they throw me out,” Yessian says.