Having to relocate across town or across the country to a new job or a new house, or to start a new life, can generate stress and anxiety — yet the U.S. Census Bureau says most of us will move an average of 12 times in our lifetime.

Fortunately, Two Men and a Truck, a Lansing-based franchise launched 30 years ago, has learned to turn the complexities of moving into a mostly stress-free practice and, at the same time, it has become one of the country’s largest moving companies.

“We try to understand what we’re moving, what’s important to the customer, and take into account specific needs,” says Jeff Wesley, CEO of Two Men and a Truck. “We just ask a lot of questions, so there’s no surprises … (then) we adapt our model and plan accordingly.”

“We’ve had over 70 months of (business) growth, 60 months of record growth,” Wesley says. “Since the 2008 housing issues and economic situations hit our country, we used that as an opportunity to kind of re-engineer some things here, and actually invest in our brand and focus on customers even more than we had in the past.”Their successful business strategy — started in 1985 by brothers Brig and Jon Sorber, and their mother, Mary Ellen Sheets, with an old pickup truck — has grown to a fleet of 2,100 trucks in cities across 39 states, with 24 locations in Canada and four overseas. In 2015, the company reported annual revenue of $400 million, representing year-to-year growth of 14.6 percent.

Shacka says the company added 22 locations in 2015 and expects to have 3,500 to 4,000 vehicles on the road and 30 new franchise units nationwide by the end of this year. To meet the high demand for moves during the summer, Two Men and a Truck launches a campaign every March to hire more employees. The company had more than 1,200 new hires in March 2015, for a total of 8,900 workers overall.

This year, the company projects another record-breaking year in revenue as well as volume of moves (500,000 in 2015). “This summer, we’ll probably do two moves every minute, so that’s just an indication of the volume we’re doing,” Shacka says.

The U.S. moving industry generates $12.6 billion annually and includes services such
as long-distance transportation, warehousing and storage, packing, and packaging, says the American Moving and Storage Association, an Alexandria, Va.-based nonprofit trade association serving more than half of the moving and storage companies across the U.S.

“The interstate market has been very stable the last few years,” says Scott Michael, CEO of the association. He says although the economy is improving and more people are deciding to move, the industry has been relatively flat — with revenue up and down 1 or 2 percent in last five years. Last year, Michael says the total industry was down about 2 percent from 2014. 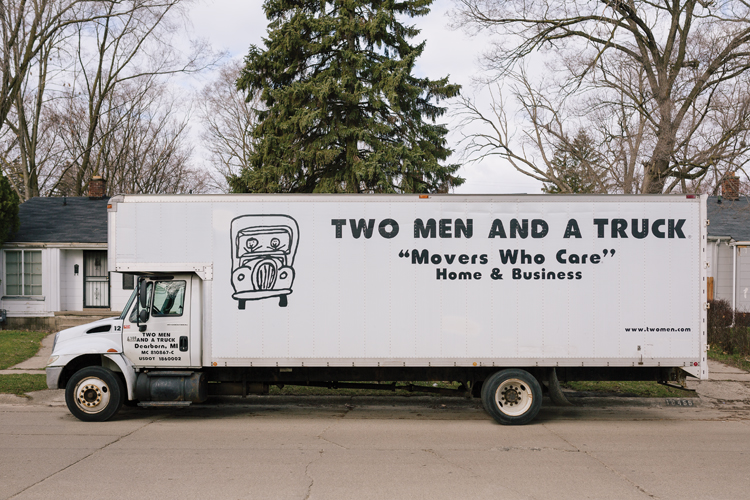 Two Men and a Truck has come a long way since its modest beginnings in a small home in Lansing. Looking to make extra cash in high school, Brig and Jon Sorber, along with an old, green pickup truck they had bought from Michigan State University, began moving people locally for $25 an hour during the summer. Their mother, Mary Ellen Sheets, who was divorced and also has a daughter, kept the books and scheduled appointments. She also designed the familiar black-and-white logo with two stick-men and the front of a truck the company still uses today.

When the boys left for college, Sheets — who continued to get requests for services — quit her job as a system analyst, bought another “really used” pickup for $350, and hired two men to continue her sons’ vision.

Over the next several years, the company continued to expand, and by 1989 Sheets had awarded the first franchise location outside of Michigan — in Atlanta — to her daughter, Melanie Bergeron.

As for Brig and Jon, following graduation from Northern Michigan University, the brothers immediately started their own Two Men and a Truck franchises in Marquette and Grand Rapids. Today, all four family members are on the board of directors. Brig and Jon serve as executive chairman and executive vice president, respectively, while Bergeron serves as chair and Sheets as adviser.

Wesley says the company has a definite career path for its employees; one-third of its movers and drivers ultimately become franchise owners, and 75 percent of the management staff got their start in entry-level positions. “We always tell people to start their job as a mover, become a driver, become a trainer, become an operations manager, and maybe someday you’ll become a franchise owner,” Wesley says. “I think those things can happen within a two-, three-year period, in terms of growth.”

Shacka, for example, started out as a college intern and gradually moved his way up to president in his 15 years with the company. “I had no idea what Two Men and Truck was. I was at Michigan State, and I was an engineering major, and I needed a job — like a lot of folks who come to our brand — and I just fell in love with the company,” he says. “I never thought being an engineering major at Michigan State, I’d be a president of a franchised moving company like Two Men and a Truck.”

Two Men and a Truck