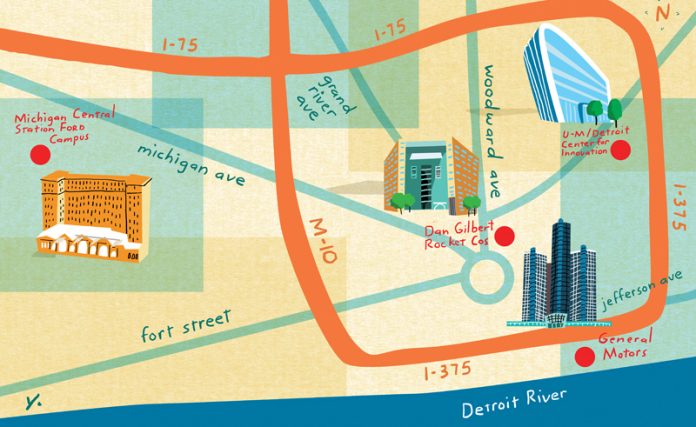 Metro Detroit can take a page from Silicon Valley’s playbook and become the mobility capital of the world. By riding the wave of new transportation solutions being developed by the automotive and technology industries, our region and state can better capitalize on our standing as one of the few places on the globe that can meld hardware and software to produce highly advanced products at scale.

Consider that in the 1970s, San Jose was a farmer’s paradise until several factors converged to make it the technology capital of the world. The dawn of the computer age helped drive the skilled science sector into developing commercialized products like cell phones and desktop computers, propelled by Stanford University and other research institutions. Funding the growth was a steady stream of U.S. Department of Defense spending and a robust venture capital market that now represents one-third of such value in the country (based on state rankings).

But the growth came with a price. California stalwarts like Tesla, Oracle, and Hewlett Packard Enterprises are now moving their headquarters to other states due to a combination of high taxes, wages, and cost of living expenses relative to other parts of the country, along with fairly stringent state regulations.

That lesson shouldn’t be lost on Detroit, given it represents an opportunity to draw high-tech firms from California. Already, the momentum is building to enhance our technical innovations and skill sets in the mobility sector, but it shouldn’t stop there. The city and state are home to thousands of companies and organizations that are leading research and manufacturing advances in defense, life sciences, medical devices, technology, engineering, cybersecurity, health care, aerospace, and agriculture.

Drilling down further, the private and public sectors have done a good job of establishing entrepreneurial ecosystems in major cities like Detroit, Ann Arbor, Grand Rapids, Battle Creek, and Kalamazoo, complemented by research at colleges and universities. More cities and organizations across the state should jump on the bandwagon to launch business incubators, paired with funding from the private sector to encourage further economic growth.

As an example, technical epicenters are emerging in and around downtown Detroit, including the 100-plus firms in the portfolio of the Rocket Family of Companies led by Dan Gilbert, as well as General Motors Co.’s world headquarters at the Renaissance Center.

In addition, at I-375 and Gratiot Avenue, Gilbert and Stephen Ross, chairman of The Related Cos. in New York City, are collaborating on the U-M/Detroit Center for Innovation. The project will include a 190,000-square-foot research and graduate education building, mid-rise residential buildings for U-M graduate students, a business incubator space, and a hotel.

The sooner we can deploy smart infrastructure, the more lives are going to be saved.  —  Trevor Pawl, Chief Mobility Officer, State of Michigan

West of downtown, Ford Motor Co. is investing $740 million to develop a mobility innovation hub among several buildings, including Michigan Central Station. The mobility campus will open in 2023.

To enhance the overall impact, planning officials should encourage collaborations between the mobility and technology zones, while state and local leaders must ramp up venture capital funding. The two-part strategy will provide for more economic growth and stimulate conversations that often lead to major breakthroughs and new enterprises.

Plenty, a San Francisco startup, reports it can produce 400 times more food per acre with vertical operations over conventional farming styles. Two acres of warehouse space filled with rows of vertical plants can produce a harvest three or four times a year. By comparison, the same output at a farm would require nearly 3,000 acres of land. Labor costs inside a warehouse also are lower, because much of the work is done by robots.

Tapping artificial intelligence and other technologies, vertical
farms can produce larger and more nutritious fruits and vegetables, while the use of fertilizers and pesticides is vastly reduced. Warehouses also aren’t impacted by a frost, a hail storm, or a tornado. Overall,
Plenty states its vertical farms use 95 percent less water than its outdoor counterparts.

Growing produce indoors also cuts down on shipping costs, as watermelons, for example, can be grown year-round. Today, watermelons and other fruits and vegetables are imported from all over the world during winter months, which raises prices. With an abundance of urban land around the state, vertical farming offers an opportunity to produce higher-quality, less expensive food using fewer resources.

When Cadillac and FCA showed off their capabilities in manufacturing VTOL aircraft components and supplying electric battery systems, it was a clear sign that an industry once dominated by ground vehicles is turning to the skies. At the virtual CES show in January, Cadillac’s Halo Portfolio revealed a one-seat eVTOL aircraft concept. Michael Simcoe, vice president of global design at GM, said it was the automaker’s “first foray into aerial mobility.”

At the same time, FCA and California’s Archer, a company working to create the world’s first all-electric airline that moves people through cities, announced a major supply agreement. Under the deal, FCA will offer Archer access to its supply chain, advanced composite material capabilities, and engineering and design experience.

The partnership is designed to help accelerate Archer’s timeline in offering cost-effective, sustainable air mobility. Morgan Stanley estimates the market will be $1.5 trillion by 2040. Other local companies like Detroit Aircraft and ASX, both at the Coleman A. Young International Airport in Detroit, along with a top aircraft component manufacturing ecosystem, serve as harbingers of a vast market for aerial passenger and cargo services.

Private and public investors should work to build on the momentum here. In turn, the market for short flights between regional airports and FAA-approved landing pads for passengers, cargo, and emergency medical supplies requires a robust communication platform where ground and aerial vehicles “talk” to each other. The good news is it can all be developed here and licensed to the world.