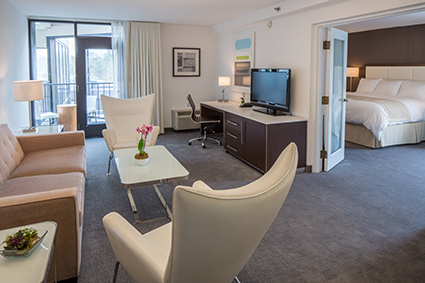 Weber’s in Ann Arbor has recently completed $2 million renovation of its 158 guest rooms and suites featuring new paint and furniture and numerous technology-related upgrades. The upgrades follow previous $4 million updates to its ballrooms, lobby, pool and exterior façade. Weber’s was founded by Herman Weber in 1937 as a restaurant before the hotel was added.

“We are incredibly pleased with the results,” says Ken Weber, president of Weber’s.  This is in keeping with my late father’s philosophy that the property must be continually improved and upgraded long before anyone outside our organization perceives a need for it.”

Each room now has a bright appearance with the addition of blues and whites brought in through new  furniture and paint; contemporary case goods; and updated carpet. In addition, guests are enjoying black and white photographs of local landmarks; Amari Rattan lounge chairs and ottomans; high-end Simmons’ bedding; and ample plug-ins and charging stations.

Many of the bathrooms have had the most drastic updates with the addition of floor-to-ceiling Italian porcelain, custom built showers with tiled benches, sliding glass barn doors, new showers and “musical mirrors,” also known as Vive mirrors that use a Bluetooth device attached to the back of the mirror to pipe music from the guest’s musical library on their phone through speakers installed in the ceiling. Users control the power and volume simply by touching the mirror in certain areas.

“Being located in a prominent tech town, we made a commitment to install the highest technological upgrades, especially the ‘musical mirrors,’ in our larger rooms,” Weber says. “We are one of the only hotels in the country to offer this feature in non-suites.”

Weber’s was recently ranked among the best hotels in the country by CollegeRank.net and the world by Expedia.com.

“As a successful family-run, independent, full-service hotel, we continuously reinvest to maintain a competitive edge with the chains. We concentrate on improving our one-of-a-kind business rather than adding new locations. It is the mindset of how we operate,” says Michael Weber, vice president of hotel operations.