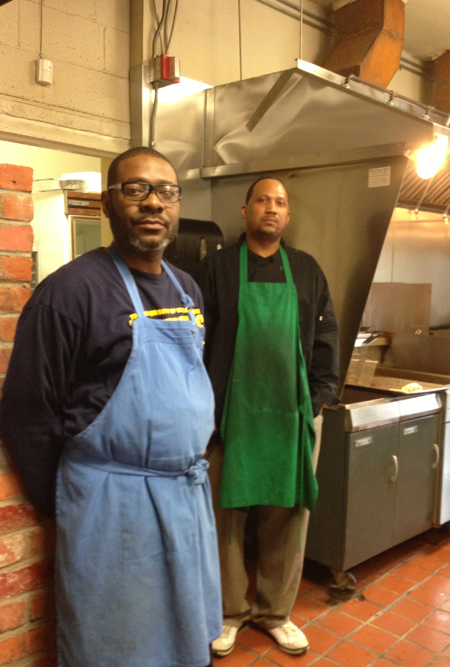 DETROIT — Before childhood friends Kevin Ward and Charlie Monagan threw down $200 apiece last December to take over its deed, Lucky’s Coney Island was another burnt-out shell in the area of Fenkell and Chapel in Detroit’s Brightmoor neighborhood.

Now, under their ownership and rebranded as Slabbee’s takeout, the refurbished venue is filled with the smells of earnestly prepared soul food and oft-lively neighborhood chatter. Given, there is no seating and the presence of the original Lucky’s outdoor marquee sign will confuse anyone looking for Slabbee’s, the proprietors quickly established a good foothold with the locals.

And they eagerly credit Detroit business incubator TechTown and Derrin Leppek for giving them a second wind.

“(Leppek) came in and ate; he liked what we were doing in the community … he was looking for a nice way to help us out through marketing and helping our business grow,” Ward says.

As director of TechTown’s SWOT City program (Strength, Weakness, Opportunity, and Threats), Leppek has led a nascent effort to propagate the entrepreneurial savvy within Brightmoor and the Jefferson East corridor that the nonprofit 501(c)(3) traditionally cultivates within the tech sector. Inspired by his time helping to rehabilitate Detroit’s Midtown district, Leppek sought the blessing of TechTown CEO Leslie Smith to start SWOT City.

“I think one of the greatest gifts Smith gave me was the power to let me explore this avenue of working with community businesses that weren’t technology based. … I’m talking urban retailers, coffee shops, clothing stores,” Leppek says. “And it really launched in this program we have today … without those businesses, we don’t have places that are livable to the extent they should be.”

The discussion about Brightmoor’s economic future began during a conference in Mackinac Island last year where Kirk Mayes, executive director of the Brightmoor Alliance, spoke with Smith about developing a strategy geared toward revitalizing the neighborhood’s businesses. “What’s interesting is that neighborhoods often don’t know that there are any resources available to help them,” Smith says.

Mayes notes that Smith was worried about residents being unaware of TechTown and the resources it had to offer, as well as its potentially confusing branding as a tech-oriented incubator. Since SWOT City officially opened an office in the neighborhood and directly engaged with Brightmoor’s businesses last October, however, the response has been visible.

In one instance, Leppek recalls walking into what was formerly Spice Restaurant as equipment was being moved out. The owners had given up and decided that it was no longer sustainable. Yet, through the team’s guidance, the business has been revived into Chef Charles Catering and is still operating.

Although continuing the philosophy that guided his own growth bears plenty of responsibility, Leppek need only look in the mirror to reflect on how his everyday efforts as a representative of TechTown can change lives. In the wake of the 2008 economic collapse, he was out of a job after 14 years on Ford Motor’s production line. Despite his latent business prowess, his resume was short on corporate experience. Yet, when his abilities were discovered and cultivated under TechTown’s entrepreneurial eyes, he landed a Wayne State University fellowship, ran a start-up worth $1.5 million, and finally assumed his current leadership role within a span of four years.

The SWOT City director’s meteoric rise from stricken to success through its entrepreneurial mentoring program isn’t uncommon within TechTown. Outside of its neighborhood rehabilitation program, the incubator is setting the bar even higher with renewed big-league support to back a meticulously crafted approach to kindling the region’s budding entrepreneurs and financial ecosystems. If a recently unveiled three-pronged initiative called the Downtown Technology Exchange proves its mettle, then TechTown may be holding the keys to revamping the tech side of Detroit.

Ambitious, yet promising enough to merit a $1 million grant from the Michigan Economic Development Corp., TechTown, along with fellow incubators Bizdom and InvestDetroit submitted a comprehensive three-pronged initiative geared toward broadening the city’s business talent pipeline.

The effort includes three programs to start in May and June. The first one is Launch Detroit, a 10-week “boot camp”  where select graduate and undergraduate students participate in an accelerator under the supervision of mentors and coaches to work on business ideas with the hope that they can start their own companies.

A second program, called D Venture, brings in “entrepreneurs-in-residence” who are proven businesspeople. They take on a variety of tasks ranging from commercializing opportunities, overseeing the creation of startups, and working with Wayne State’s more than 350 researchers. More researchers will be hired to fill out the university’s future $93 million biomedical research facility.

Finally, the Fellows program is geared toward inserting six, mid-career entrepreneurs into the Detroit business ecosystem and assigning them multiple portfolio companies to manage.

Reinforcing how impressed his organization was with the collaborative effort, MEDC President and CEO Michael Finney has great aspirations. “We want to see things in programs that are geared toward creating jobs, attracting and retaining talent, exploiting new technologies that are coming out of our universities, and entering our communities,” he says.

For the blocks of derelict houses and vandalized walls in Brightmoor, the road toward improvement may not be so easy. From his perspective within Brightmoor, Mayes asks, “How can we improve the quality of life for people that are here in this time frame when we have access to information and technology that connects the entire world?”

Perhaps, it will be people like Monagan and Ward who will answer the call at the frontlines, armed with the entrepreneurial strategy and tactics bestowed on them by Leppek and his colleagues at TechTown.

“We know the money is going to come later,” Monagan says. “But the whole thing is that we love the community, and what makes me happy is to see people enjoying our food … that’s the biggest paycheck right there.”