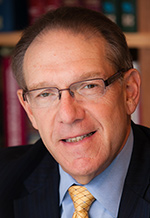 Jules B. Olsman, president of Berkley-based Olsman MacKenzie & Wallace, was recently presented with the 2016 Champion of Justice Award by the Michigan Association for Justice at its recent annual meeting in Detroit.

The award recognizes the recipient’s commitment to the civil justice system and its role in protecting the public. Olsman is a past president of the organization and is also a member of the Huntington Woods City Commission.

Olsman was named a DBusiness Top Lawyer from 2010-2016 and has been ranked at the highest level of professional excellence by Martindale-Hubbell.

He is a past president of the Michigan Association for Justice., and has served as an adjunct professor at Michigan State University College of Law where he taught medical malpractice litigation.  He was appointed by Gov. Jennifer Granholm to serve on the Governor’s Task Force on Elder Abuse.  He also served as legislative counsel and as a member of the executive board of Citizens for Better Care.

He is a past chair of the State Bar Negligence Law Section and a founding member of the American Association for Justice Nursing Home Litigation Group.