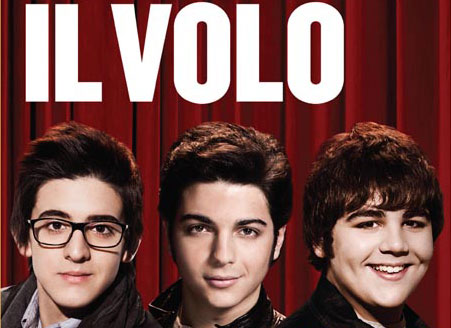 At times, it pays to take one step back to move two steps ahead. When Anthony Rugiero, president of Antonio’s Cucina Italiana and Roman Village first heard Il Volo — arguably the hottest singing sensation in Italy — he had a “middle of the night” dream to produce a special benefit concert to raise money for three charities with strong ties to metro Detroit.


“As things went, we planned to have a concert at the Detroit Opera House, but Live Nation stepped in to produce a North American concert series, so the show was moved to the Fox Theatre (on Oct. 16),” says Rugiero. “That was great news, but I still wanted to keep my commitment to the three charities, so we’re hosting a VIP Encore Benefit Dinner for Il Volo after the concert at the Detroit Opera House.”


Il Volo, which means “flight,” are a trio of teenage opera singers who are already being referenced as the three young tenors. A cross between Andrea Bocelli and the Jonas Brothers, Il Volo just released their first album, which is expected to sell more than 1.2 million copies by the end of the year.


The three youngsters, none of whom had formal training, came together after a producer suggested they form a group after appearing individually on “Ti Lascio una Canzone,” Italy’s version of “America Idol.” Famed producer Tony Renis is overseeing the group’s rapid rise along with Jimmy Iovine, who helped produce such superstars as Lady Gaga and Eminem.


Tom Celani, principal of Luna Entertainment in Novi, and co-owner with his wife, Vicki, of Celani Family Vineyards in Napa Valley, says he was amazed by the singing prowess of Il Volo. “I saw them appear on The Tonight Show, and when I heard Anthony was interested in bringing them to Detroit, I wanted to be a part of it,” Celani says. “To really set your self apart in the charitable world, you need to create lifetime experiences for donors.”


Major sponsors include Fiat, Celani Family Vineyards, Soave Enterprises in Detroit, Antonio’s Cucina Italiana in Canton Township, Dearborn Heights, and Farmington Hills, Roman Village in Dearborn, and Rugiero Promise Foundation. Fiat will host the pre-reception, to be called Cafe Cinquecento, named after one of its vehicles. Fiat relaunched its brand in North America this summer.


The three benefiting charities are:

Volterra-Detroit Foundation, which supports The University of Detroit Mercy School of Architecture along with the Comune di Volterra have formed a unique partnership to provide a new educational opportunity in the City of Volterra, Italy for students in metro-Detroit. This is a wonderful opportunity for Detroit and Italy to build a connection that will benefit our children and enhance their educational opportunities. Unique to this project, U.S. students will be able to study in Italy for no additional fee, after paying their regular college tuition.
http://www.volterra-detroit.org

Italian Language Inter-Cultural Alliance (ILICA), a worldwide organization that opens doors for many students around the world to learn more about Italy, its language and its culture through programs and activities that support the value of Italian heritage. The IlICA organization is the leader in promoting and facilitating the study of Italian language in American schools.  http://www.ilicait.org

Boys’ Town of Italy, which has funded the development of more than sixty child care centers for communities throughout the globe, and has been the primary sponsor of the Boys’ Towns and Girls’ Town in Rome and United States. They continue to work for the humanity and welfare of children in need around the world. http://boystownofitaly.org

For IL Volo Benefit Dinner and VIP Ticket and Sponsorship information, please call (313) 590-7493 or visit ILVoloevent@yahoo.com or go to the event page at antoniosrestaurants.com. 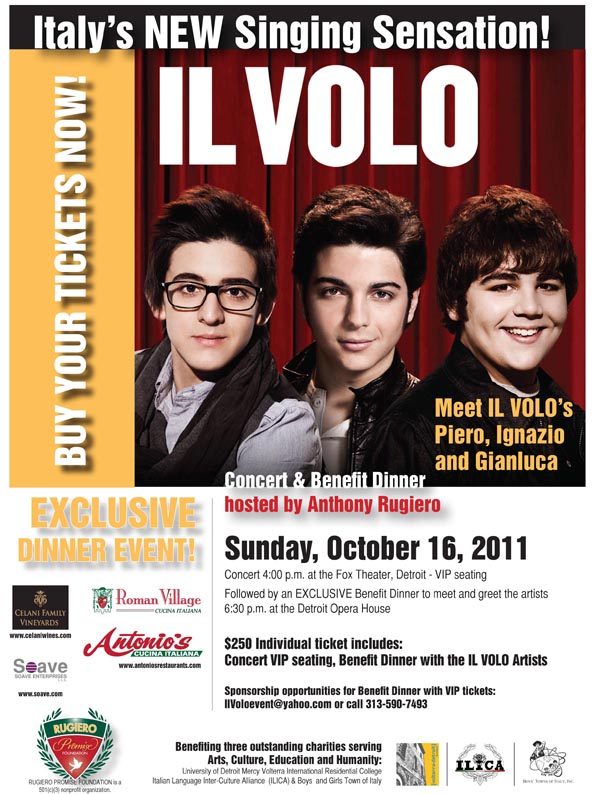