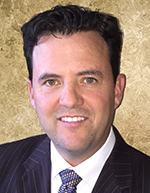 Previously, Corriveau was the director of Michigan Advocacy for Trinity Health System, where he was responsible for all government relations and public policy issues for the health system at both the state and federal levels. He also served as a government relations attorney for the Lansing-based Kelley-Cawthorne law firm and in the Michigan’s House of Representatives. During his term, he was chairman of both the Health Policy Committee and the Ethics and Elections Committee.

As a reservist in the U.S. Navy, he also received two letters of commendation as well as the Joseph Gregg award for “Most Outstanding Recruit.”