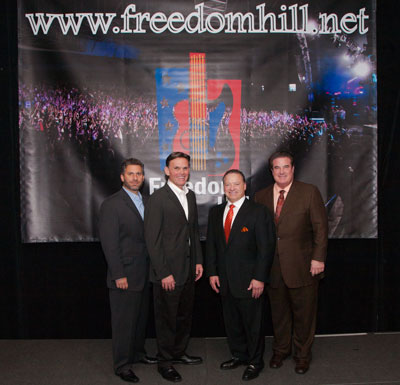 A new ownership team at Freedom Hill Amphitheatre in Sterling Heights plans to spend $2 million in improvements and reopen the 4,200-seat facility in June.

Closed for three years, the venue plans up to 40 events next year, including a Lady Antebellum concert on June 13 (tickets go on sale on Dec. 14) along with the Macomb County Stars and Stripes Festival (June 28-30).

“We see (the facility) as a win-win for the city and region, and more importantly, it would create economic development and good jobs,” says Tom Celani, principal of Luna Entertainment in Novi, and co-owner of Luna Hillside LLC, the new entity formed to acquire Freedom Hill from Roncelli Inc.

Joe Vicari, founder and CEO of Andiamo Restaurant Group in Warren, joins Celani in the venture. The pair, friends for more than 30 years, plan several upgrades at Freedom Hill in the coming months, including new technological, lighting, and cosmetic improvements. “We have the passion and commitment to take things to the next level,” Vicari says. Andiamo Restaurant Group, which owns and operates more than a dozen restaurants in the region, will provide food and beverage service at Freedom Hill.

During a press conference Dec. 4 at Andiamo Celebrity Showroom in Warren, Celani outlined the improvements for Freedom Hill, which has capacity for 7,200 people (3,000 on the lawn).

“We’re upgrading the bars, installing big screens with beautiful picture quality, and adding lights to the parking lot,” Celani says. “It’s not just about putting bands on the stage. It’s about making sure people leave having had a good time.”

Celani, a Detroit native, has been in the gaming and entertainment industry for nearly 25 years and currently operates a number of successful businesses under the Luna umbrella. Celani’s business ventures include Motor City Harley-Davidson in Farmington Hills, Motor City Power Sports in Bloomfield Township, MJR Theatres (multiple locations), and Celani Family Vineyards in Napa Valley.

AEG Live, the second largest live performance, booking agency in the world, will sign acts at Freedom Hill. The company also operates the Royal Oak Music Theatre. Joe Litvag, senior vice president of AEG Live, says the company is looking forward to making a bigger mark in metro Detroit. “We having a saying at AEG that we don’t need to be the biggest, but we need to be the best,” he says. “We’re excited to have the opportunity to grow our company by working with Freedom Hill, and we hope to bring it to its best.”

Litvag says AEG Live will offer its new AXS service, a digital platform for ticket sales, at Freedom Hill. In addition to rock and country acts, the amphitheater will host six festivals, including Harley Fest on June 8.

Macomb County Executive Mark Hackel said, “Freedom Hill Park provides an opportunity for success. I’m confident the reopening will be an economic asset and improve our quality of life.”