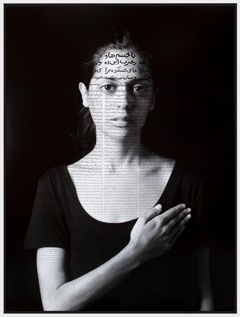 DETROIT — The Detroit Institute of Arts presents Shirin Neshat, a mid-career retrospective of Iranian American artist Shirin Neshat, April 7–July 7. Neshat is known for her exceptional photography, films and video installations that deal with issues of gender, politics and identity.

This exhibition is the first major showing of Neshat’s work in more than 10 years and is free with museum admission. Shirin Neshat is organized by the Detroit Institute of Arts. Generous support has been provided by the MetLife Foundation, The Andy Warhol Foundation for the Visual Arts, the National Endowment for the Arts, and The Robert Mapplethorpe Foundation.

Neshat was born in Qazvin, Iran, in 1957 and grew up during a relatively progressive time in that country’s history for women and the arts. Shortly after she came to the United States for her studies, Iran’s 1979 Islamic Revolution brought a conservative regime to power. As restrictions on expression, dissent, and the activities of women increased in her homeland, Neshat explored the relationship between the personal and the political, and the individual and the nation. She has spent most of her adult life in the United States.

The photography and video installations represent 20 years of Neshat’s work. Her richly complex images integrate issues related to Iranian politics and history, images of Muslim women and references to Iranian literature. Her art explores the spaces between her personal aspirations, extraordinary life story, and socio-political situation in Iran, and, by extension, the Muslim world. Though deeply rooted in her Iranian background, Neshat’s work also incorporates universal themes of empowerment, loss, sacrifice, and the human desire for expression.

“The Detroit Institute of Arts is thrilled and privileged to present this comprehensive exhibition of Shirin Neshat’s art, which shows many of her photographs and videos together for the first time,” said Graham W.J. Beal, DIA director. “When I first viewed her work in 2000, I was particularly entranced by the serenity and stark beauty of what I saw, qualities that pervade Neshat’s work even as she engages with the demanding issues of power, gender and social values.”

Shirin Neshat includes Neshat’s early video installations Turbulent (1998), Rapture (1999) and Fervor (2000), which explore gender roles in Iran and other conservative Muslim cultures. In Turbulent, Neshat addresses Iranian laws imposed after the Islamic Revolution of 1979 that prohibited women from singing in public. Rapture is a nonverbal, visual poem where groups of men and women occupy separate realms, alternating their observations of each other. In Fervor, Neshat quietly and powerfully examines cultural attitudes about desire and sexuality in traditional Muslim cultures.

Also included are Tooba (2002) and her recent video installation Women Without Men (2011). Tooba was Neshat’s first work made after September 11, 2001. Living and working as an Iranian in New York City at that time, she struggled to process the tragedy that took place on her doorstep. The resultant tide of U.S. policies and anti-Muslim sentiment caused her to question whether she and other Muslims were fully accepted in their adopted home. In Tooba, Neshat shifted her focus from Iranian gender politics to the human desire for sanctuary.

Women Without Men was adapted from a novel written by Shahrnush Parsipur. The three video installations included in the exhibition (there are five, total), follow three female characters: Munis, an aspiring political activist; Mahdokht, a would-be mother; and Zarin, a prostitute. Their stories are set against the social and political backdrop of 1950s Iran. Neshat researched the period extensively to achieve realistic detail, from the decor of a brothel to demonstrations on the streets of Tehran. But as in the novel, Neshat creates disjointed timelines and imaginary, surreal elements to convey the emotional and psychological turmoil of the characters.

Neshat was drawn not only to the novel but also to the novelist. When Women Without Men was first published in 1989, Iranian authorities imprisoned Shahrnush Parsipur for writing openly about women’s sexuality and discontent. Parsipur’s novel and Neshat’s film remain banned in Iran.

Two series of photographs are also in the exhibition: Women of Allah (1993–97) and The Book of Kings. Women of Allah examines the status of women in Iran after its shift from secular to conservative religious rule. The Book of Kings asks who possesses political power? A larger-than-life dictator? The overwhelming masses of ordinary people? Only a dedicated few? Or does power circulate between them all?