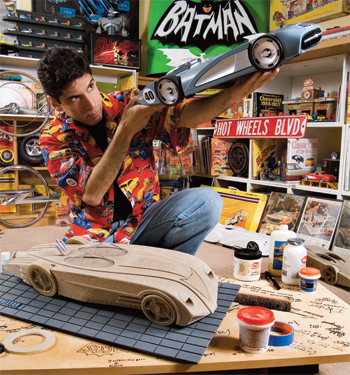 Nine months ago, Amaury Diaz Serrano’s boss at the General Motors Technical Center in Warren gave the vehicle designer an unusual assignment — craft a 1/64-scale model of his dream car as part of the first-ever Hot Wheels Designer’s Challenge. Eight weeks later, Diaz Serrano unveiled the Chevroletor, inspired by 1930-era racers, a 1957 Corvette SS, and all things Batman. “The coolest thing was joining the other six winners on stage at the SEMA show in Las Vegas (in November),” says Diaz Serrano, 47. “Now I’m just waiting for the Chevroletor to go on sale in February.” An avid toy collector — the Puerto Rico native owns more than 3,000 Hot Wheels, toy garages, and other play memorabilia — Diaz Serrano says his basement is the most popular room in the house. “I give some of the toys away every year to needy kids,” he says, “and I usually pick up a new Hot Wheels every time I go shopping.” Apart from creating the Chevroletor (the name was inspired by Arnold Schwarzenegger’s Terminator character), Diaz Serrano has been working on the upcoming Chevrolet Camaro, to be introduced in 2009. “I never would’ve imagined that I would have two cool jobs in my life,” he says — “designing cars for GM and Hot Wheels.”