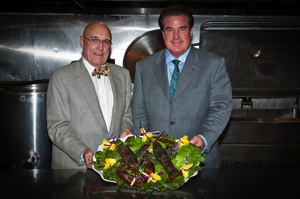 DETROIT, March 31, 2011 — Joe Muer’s Seafood Restaurant is returning to Detroit thanks to a friendship between veteran restaurateurs.

Joe Vicari, president and CEO of Andiamo Restaurant Group in Warren, and Joe Muer III, grandson of the original proprietor, announced today the plans for a 250-seat eatery to open in September in the former Seldom Blues space inside Detroit’s Renaissance Center.

“Joe and I did a fundraiser at St. John’s Hospital a decade ago, and we hit it off right away,” says Vicari, principal of 20 restaurants in the region, including Andiamo Detroit Riverfront inside the RenCen. “We started talking about bringing back Joe Muer’s, and one thing led to another and I bought the naming rights, all of the recipes from the original location, and brought Joe on as a consultant.”

The menu will include lunch and dinner classics such as filet of lemon sole, broiled swordfish, fried Cape Cod scallops, and tenderloin and lobster tail. Entrée prices are expected to range from $10 to $20 for lunch, and $18 to $45 for dinner. The venue will be able to handle private events of up to 100 people.

“We’ll buy the freshest fish possible and tap many of Joe’s former suppliers to bring back one of the all-time great Detroit dining experiences,” Vicari adds.

There’s also the potential for a carryout chowder bar near the restaurant by the entrance to the Marriott hotel. The chowder bar would cater to office employees, hotel guests, and visitors to Detroit’s RiverWalk.

The market for fine dining restaurants has been mixed in recent years as the sluggish economy has impacted business and personal expenditures. Vicari is one of the few restaurateurs that have not only weathered the downturn, but expanded despite of it. The trick, he says, is to react quickly to changing dining and spending habits, even if it means changing the theme and design of an existing location. “Everyone is accountable in our business, from the busboys to the chefs to the managers,” Vicari says. “It’s all about building the right culture, and then executing so that our patrons walk away with a memorable dining experience. It’s what keeps bringing them back.”

Vicari has hired longtime designer Ron Rea, principal of Ron & Roman in downtown Birmingham, to recreate many of the features of the original restaurant in the former Seldom Blues space. The offerings will include a modern version of Joe Muer’s famous bar, along with a piano bar. A large series of windows overlooking the Detroit River will remain in place.

“The main bar will be more round, and the overall feel of the restaurant will be traditional, like a Boston seafood restaurant with dark wood tones,” Vicari says. “We’re really excited to be doing something in downtown Detroit in the corporate headquarters of General Motors and many other established and growing businesses. Plus, there’s a lot of people living in the region and state who remember dining at Joe Muer’s.”

A cigar producer, Muer’s grandfather, Joseph Muer Jr., opened what was a live oyster bar at 2000 Gratiot Avenue near Detroit’s Eastern Market on October 28, 1929 (with seven tables and five employees). As the eatery gained in popularity, the patriarch scaled back his cigar operation to expand the restaurant. In its heyday, the eatery served corporate titans, politicians, entertainers, and families. The establishment closed on May 15, 1988 due to declining sales and other factors.

“I remember going to the restaurant on Sundays with my dad,” says Muer, who is writing a book about his family’s business and culinary history. “My brother, Chuck, and I, would sweep and mop the floors, tutor under the chef, and learn to greet people the proper way. I can’t wait to be back open again.”