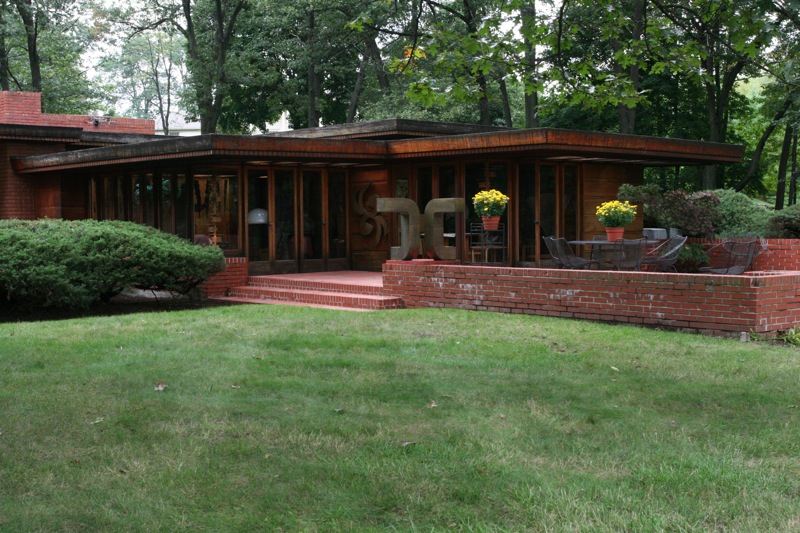 The swift crunch of tires hitting a dirt lane filled A. Alfred Taubman’s ears as he steered his car off Lone Pine Road in Bloomfield Township. The construction owner was searching for a home designed by Frank Lloyd Wright along Ponvalley Road that had been commissioned by a pair of teachers from Cranbrook Educational Community in Bloomfield Hills.

The brick and cypress clad structure, which Wright had designed in the late 1940s, was slowly taking shape along the western edge of a bowl-shaped meadow. The year was 1950, and Taubman aimed to measure the progress of the construction project, while satisfying his own curiosity.

“The fall weather was a few weeks away, and I had heard the couple was building the home themselves (to save money),” says Taubman, founder of Taubman Centers Inc. in Bloomfield Hills, which he built into the nation’s largest collection of luxury shopping malls. “When I found the construction site, I sensed there was a problem.”

The owners, Melvyn Maxwell and Sara Stein Smith, had all but completed the home’s exterior over the course of their summer break. But as with many do-it-yourself projects, the couple’s financial plan was a ‘pay-as-you-go’ endeavor.

“I introduced myself, and noticed Mr. Smith was looking rather forlorn, so I asked what was the matter,” says Taubman, who had studied architecture at the University of Michigan in Ann Arbor and Lawrence Technological University in Southfield. “He said he didn’t have all of the money to buy the windows, so he was in the process of boarding up the openings. I think he had like $500 left in his bank account.”

Taubman knew the approaching winter would destroy the home. Without protection from the elements, the interior components would bend and fray, not to mention the untold damage created by rapid periods of freezing and thawing. Pondering the dilemma, Taubman offered his assistance.

The following day, workers arrived to measure the window openings. Two weeks later, the glass was delivered and installed. Taubman says he doesn’t recall the total price of materials and labor, but he submitted a $500 invoice to the couple, which was paid.

“I didn’t have a lot of money at the time, so this was not something I took on lightly,” Taubman recalls. “Clearly, the house wouldn’t last through the winter. I felt compelled to do something because it was a fantastic structure and the couple had put a tremendous amount of work into it.”

As it turns out, Wright visited the L-shaped, one-story structure on three occasions. Upon his original tour in 1951, the architect referred to the home as “my little gem,” Sara Smith recalled in subsequent interviews. “It’s one of my favorite homes,” Taubman adds.

Now listed on the National Register of Historic Places, the 1,800-square-foot home is owned by the Melvyn Maxwell and Sara Stein Smith Foundation in Franklin. On occasion, it is available for private tours and gatherings.