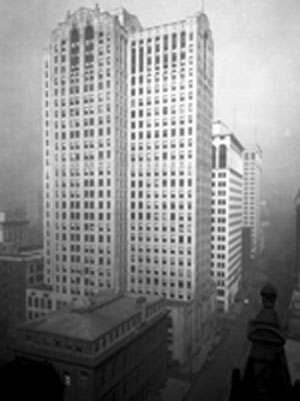 Known for their sober integrity and a golden touch that created a business empire, Christian and Frederick Buhl, who started in Detroit as hat and cap manufacturers in 1833, passed along to their descendants the knack for propitious timing. That was evident in 1923, when the Buhl Land Co., led by Christian’s grandsons Arthur and Lawrence, announced that it would raze the four-story Buhl Building at Griswold and Congress and replace it with a 26-story office tower.

Law firms, as well as an important law library, dominated tenancy at the original Buhl Building, which dated from 1875. Eager to diversify, the Buhls sought to strike a chord with the burgeoning financial markets for the new edifice. Cam & Hawley, specialists in industrial financing and operations, would occupy the entire fourth floor. The brokerage firm of Ware & Co. moved its nascent Detroit operation into a large suite of offices, which included private quarters with stock tickers for clients who disdained the public boardroom. Commercial real estate specialists Wark-Gilbert Co. claimed the entire west wing on the 15th floor.

While leasing went ahead, architects Smith, Hinchman & Grylls, and chief designer Wirt Rowland, finalized the plans. The building would take the form of a Latin cross, giving outside windows to every office and producing more corner locations than a traditional boxy design. Ornamentation included some 50 different symbols representing the site’s past and future, from Indian chiefs to Mercury, the Roman god of commerce.

Under the direction of general contractor Davis & McGonigle Co., construction commenced on March 1, 1924. Watertight caissons were sunk 70 feet into a bed of hard clay, establishing the foundation. By fall, the pouring of 14,000 cubic yards of concrete was under way. The building was completed 10 days prior to its scheduled opening of Jan. 1, 1925.

Above the granite base, the structure was clad with 3,100 tons of washable terra cotta that was claimed to be stronger than stone — it was also more expensive — and was laid in random-sized blocks. “The entire ensemble of the building exterior is one of peculiar charm,” wrote a contemporary observer. Inside, the lavish finish included 134,000 square feet of marble.

Rowland’s neighboring Guardian Building, which opened in 1930, quickly became the U.S. Army Command Center for wartime production. At the time, Washington, D.C. wasn’t adept at building things, so the work went to Detroit and its mass-production skillset. Although few people knew it at the time, automobile manufacturers and suppliers got their marching orders to build tanks, planes, and munitions at the Guardian. From there, they headed to the Buhl to arrange financing for land, factories, equipment, and manpower.

A decade later, the Buhl met the spirit and call to action set by President  Roosevelt in a radio address outlining the country’s support of Great Britain against Germany on Dec. 28, 1940: “We must apply ourselves to our task with the same resolution, the same sense of urgency, the same spirit of patriotism and sacrifice as we would show were we at war.” db