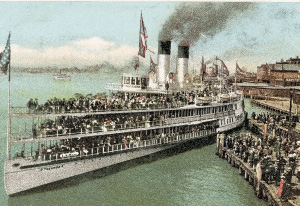 The throng of sweltering people at the White Star Line’s Griswold Street dock in downtown Detroit had but one word on their lips: “Tashmoo.” Eager to escape the oppressive summer heat, they anxiously awaited boarding the luxurious white steamer Tashmoo, spilling onto all three of its passenger decks. They delighted as the 320-foot-long side-wheeler, nicknamed “The White Flyer,” reached its top speed of 22 miles per hour. She whisked them past Belle Isle and crossed Lake St. Clair in a snap, stopping at a South Channel location here or there before finally calling at her namesake, Tashmoo Park, on Harsens Island.

Celebrated in verse for its “charming walks ’neath arching trees,” Tashmoo Park offered 60 acres of picnic grounds, a swimming beach, and a large bathhouse. Founded in 1896, Tashmoo Park also enjoyed service from the steamers Darius Cole and Greyhound. Four years later, the park was purchased by White Star Line, whose brand-new Tashmoo needed a destination that would increase passenger traffic on the Detroit-to-Port Huron route. With round-trip fares (under $1) on the rise, White Star was quick to add a casino, where people could dance and play cards.

The added recreational offerings drove revenue a step further, and Tashmoo Park became a popular destination for large groups. Historian Michael W. Dixon writes that it was the “favorite resort for companies, churches, fraternal societies, and even whole communities to hold their annual picnics.” The town of New Baltimore staged its big doings there, and among the events were the married women’s 50-yard dash and the fat man’s race. The pie-eating contest and greased-pig chase were de rigueur. Souvenir stands sold craft items made by the native population of nearby Walpole Island, on the Canadian side of the border.

In 1912, the peak year for lake steamers, a pavilion was constructed, with the roof supported by steel arches, leaving 10,400 square feet of unobstructed wooden dance-floor space. William Finzel’s Arcadia Orchestra of Detroit, a 10-piece jazz ensemble, regularly played there (and on the boat, too). Around 1920, the park added carnival attractions such as a Ferris wheel, an airplane ride, and a rotary whip ride modeled after the Coney Island sensation of a few years before.

The people of nearby Algonac saw Tashmoo Park as a boon and took jobs there. In 1975, one old-timer told a newspaper reporter he had earned $1 per day around 1915. “I worked on the merry-go-’round, at the lunchroom, and in the cafeteria, and I can’t recall a fight ever happening at the park,” he said. Another local recalled how the Saturday-night moonlight cruises left the park “just plastered with people.” Merely unloading all the passengers could take up to 45 minutes.

But changes that already were underfoot would soon affect Tashmoo Park. In 1915, the overloaded steamer Eastland capsized in Chicago’s waters, resulting in the deaths of more than 800 people. Soon afterward, Congress passed the Seaman’s Act, which restricted the number of passengers in relation to the amount of lifesaving devices on board. Operating costs subsequently became a factor for wooden-hulled vessels like the Tashmoo. Meanwhile, choices in entertainment broadened — the emerging Boblo Island was closer — while Henry Ford’s affordable Model T provided mobility to the masses, and Tashmoo Park soon grew passé.

Of even greater significance, though, was the Tashmoo’s striking a rock near Amherstburg, Ontario, during a 1936 charter excursion. Although not a life was lost, the vessel sank. Other steamers carried large groups for picnics until Tashmoo Park finally closed in 1951. Now, only a few structures remain; the once-hallowed halls are dedicated to the solitary task of boat storage.

View more photos of the Tashmoo below. Prints courtesy of Nick Martines.