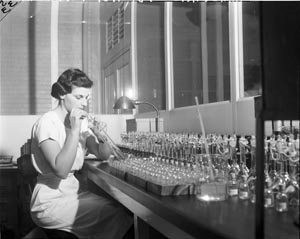 The Detroit funerals of the founders of Parke-Davis couldn’t have been more different. At Hervey Parke’s, in 1899, mourners packed St. John’s Episcopal Church on Woodward. Special seating was reserved for local business leaders, including the Manufacturers’ Club members who attended together. But in 1931, only a handful of mourners witnessed a brief ceremony for George Davis, conducted in Elmwood Cemetery. Ruined by real estate speculation and forced to resign from Parke-Davis & Co. in 1896 for embezzling, Davis spent his last three decades in Detroit rooming houses, talking of the racehorses he used to own.

A brilliant salesman and corporate strategist, Davis, at age 22, had joined the struggling Duffield & Parke in 1867. Samuel Duffield soon departed, and Davis’ name went on the marquee. He pushed for standardized compounds and developing the first organized, systematic method for clinically testing new drugs. Parke-Davis undertook industrial research when it was “practically unknown,” according to a history published for the firm’s centennial in 1966. A pair of University of Michigan scientists was recruited to lead the way in the transition from herbal remedies to biological drugs, and in 1902 an impressive 25-acre R&D facility was completed on the riverfront (known today as Stroh River Place). During that era, blood serums came from horses that lived in stables bought from the Detroit Urban Railway, and antitoxins for diphtheria and tetanus were created. Isolating therapeutic hormones, like adrenaline, was another company specialty.

Davis also launched worldwide research expeditions. “How soon could you be ready to start for Bolivia?” he asked employee Henry Rusby, a botanist, in 1884. Davis wanted Rusby to send back a large supply of coca (cocaine). Perfectly legal at the time, the narcotic was prescribed for pain relief, mood alteration, and appetite suppression. Rusby’s two-year sojourn also resulted in the collection of 45,000 botanical samples including cocillana, which was made from the dried bark of a Bolivian tree and used in cough syrup and for the treatment of bronchitis.

Expanding throughout the 1880s, Parke-Davis became the city’s second-largest industry after stove manufacturing. Around 900 employees reported at 7 a.m. and worked until 5:30 p.m. Monday through Friday, with a six-hour shift on Saturday. The women who made gelatin capsules could turn out 10,000 per shift, trimming and joining them by hand and bringing home 80 cents a day. After Parke’s death, Theodore Buhl, who was running the company, slightly reduced the employees’ workweek.

In 1907, the company purchased a 340-acre farm in Oakland County’s Avon Township to house its growing number of research animals, including rabbits, guinea pigs, horses, cows, and monkeys.

The company’s crowning achievement came after World War II, with the release of the antibiotic Chloromycetin and Benadryl — the first antihistamine in the United States. The antibiotic was derived after cultured molds from a Venezuelan soil sample were found to be effective against typhus and other diseases. The company’s top chemists managed to synthesize the natural properties of this compound by 1949. In the next three years, the antibiotic earned $120 million for the company. Anesthetics, fertility drugs, contraceptives, pain relievers, and many other products were issued from facilities in 27 nations.

Parke-Davis always showed strong profitability and paid regular dividends. Its revenue of $15,000 in 1866 grew to $224 million by 1965 (with $32 million in profits). The company was an alluring target, and its 1970 merger with Warner-Lambert created a colossal $1.7-billion corporation — one of the country’s 100 largest. Pfizer acquired Warner-Lambert in 2000, and operations were dispersed from the area.

Yet, even today, a company called King Pharmaceuticals produces drugs at the Parkedale farm in Avon Township. And a massive Ann Arbor facility was recently acquired by the University of Michigan and is being used for medical research, along with business incubation. The Parke-Davis research campus along the Detroit River was converted into private offices, hotel, loft apartments, and the Rattlesnake Club. These monuments attest to the foresight of the conservative gentleman Hervey Parke, who recognized an industry with potential for growth, and to the daring and innovative notions of George Davis.