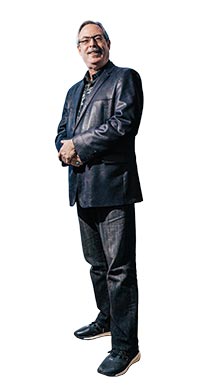 With the launch of the new
CT6 at the New York International Auto Show in early April, Cadillac is back in the premium luxury car market for the first time in years, taking direct aim at vaunted competitors such as the Mercedes-Benz S-Class, BMW 7-Series, and Lexus LS.

The CT6 is just one in a wave of new products coming from the General Motors luxury brand. In recent months, the division has introduced two new high-performance models, the ATS-V and CTS-V. It’s working on a replacement for its aging SRX sport-utility vehicle
and has at least two other crossover models in development.

There’s also a new entry model that will slot under the compact Cadillac ATS, targeting one of the world’s fastest-growing luxury market segments. Johan de Nysschen, who took over as the global president of the brand last year, confides he wants to have an even more upscale model than the CT6 in showrooms “by the end of the decade.”

The South African-born executive clearly understands the need to flesh out what was long an anemic product lineup. He spent a number of years as the U.S. CEO for Audi, which has engaged in its own product blitz
to gain ground on Mercedes and BMW. More recently, de Nysschen was operating out of Hong Kong where, as global president of Nissan’s high-line Infiniti brand, he was laying the groundwork for a major product expansion program.

If you build it, will they come? Not necessarily. Cadillac’s history is replete with examples of products that missed the mark, including the Allante convertible and the big STS sedan. Despite being named the 2013 North American Car of the Year, demand for the Caddy ATS has lagged behind expectations. In de Nysschen’s eyes, the brand’s Detroit-based staff — especially its product planners and marketers — has lost touch with U.S. luxury buyers.

That led de Nysschen to make his most controversial decision to date, ordering a cadre of core executives to de-camp for a new headquarters in New York City where, he argues, they will rub shoulders daily with the sort of buyers who have made BMW and Mercedes the country’s top-selling luxury brands. Curiously, it’s the third time de Nysschen has been involved in a major relocation. Audi — along with parent Volkswagen of America — moved from Detroit to the Washington, D.C. suburbs in 2008. Meanwhile, Infiniti was already set to move its global headquarters to Hong Kong when de Nysschen came aboard.

Whether the relocation of Cadillac will work is far from certain. Ford tried to base its Premier Automotive Group — including European luxury brands Aston Martin, Jaguar, Land Rover, and Volvo — in Orange County, Calif., only to bring them back to Dearborn when the promised sales surge didn’t materialize. In reality, only a small fraction of the Caddy team will pick up for the Big Apple. Design, engineering, and a sizable corporate core will remain in Detroit and at the Warren Technical Center. At least everyone will be in the same time zone and less than two hours apart by plane.

Improving Cadillac’s marketing is clearly something that needs to be done. Put at least some of the blame for the poor showing of the ATS on its ineffectual “Cadillac ATS vs. the World” ad campaign, although at least it tried to be relevant. For many potential buyers, the brand is stuck firmly in the past. They’re more likely to recall the finned wonders of the ’50s and ’60s than anything Cadillac has brought to market in recent years.

“They’re not connecting with consumers and getting on their shopping lists,” says Stephanie Brinley, senior auto analyst with the consulting firm IHS Automotive. The irony, she adds, is that “People still use the name Cadillac as a definition for the best something can be. But the brand no longer means that to a lot of people. It’s lost its relevance.”

Which is too bad. As a member of the North American Car of the Year jury, I was clearly impressed by the ATS — which, my colleagues generally agreed, was one of the first cars from anywhere to really draw a bead on the compact luxury benchmark, the BMW 3-Series. The new CTS is another world-class offering that isn’t getting just recognition. The question now is whether the CT6, with its model nomenclature, will also get lost in the crowd.

It’s been a long time since Cadillac could truly justify its claim of being “the Standard of the World.” Recent studies by J.D. Power and other market research firms show the brand’s products are gaining ground in terms of reliability and quality, and new features such as the upcoming, near-autonomous Super Drive system should put Caddy on a technical par. But if it can’t convince potential buyers to care, the multibillion-dollar product expansion — and its New York location — won’t really matter. db