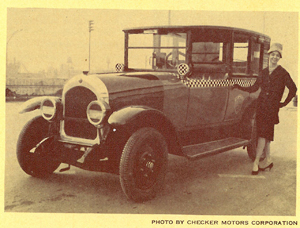 Entering service on June 25, 1914, the Detroit Taxicab & Transfer Co.’s first electric vehicle glided away from the Hotel Pontchartrain, blending into the busy traffic of downtown. Within a year, that cab would cover almost 12,500 miles on its cushy B.F. Goodrich Silvertown pneumatic tires. Designing and building its own cabs, the DTTC presumed the durability of the nickel-iron batteries developed by Thomas Edison. Introduced in 1903, they outperformed the fragile first-generation cells used from 1897 to 1900 in a fleet of weighty New York cabs that rode on hard rubber tires.

The DTTC led the way as early as 1910 in the “transferring” industry, boasting more than three times as many cabs as all city competitors combined. It advertised “fleet-footed, comfortable Taxicab[s] for less cost than the old plodding horse-drawn cab.” Fare meters neutralized the shady tendencies of nighthawk drivers. You needed only call Main or City 5620, and the “usher” would summon your ride.

Eight companies fielded 150 cabs on Detroit’s streets in 1911. The Detroit Free Press extolled taxicabs, saying: “The man who doesn’t own an automobile can have just as much pleasure riding in a taxicab … as the man who has a dozen machines in his garage.”

The Pennell-Dawson Quick (P-DQ) Taxi Service joined the fray in 1912, offering cheaper fares, all-new cars, and good drivers dispatched from its garage at 14 Alexandrine Ave. West. The taxicab industry looked so promising that some manufacturers specialized in building cars to suit. The Yellow Coach Manufacturing Co., founded in Chicago by John Hertz in 1915, was acquired by General Motors in 1925. Hertz later started one of the nation’s first rental car companies.

DTTC founder I.S. Scrimger began to envision a nearly all-electric fleet, with only a few gas-engine cabs for long runs. Studies showed the electric propulsion cabs operated for less than 20 cents per mile and, with fares ranging as high as 70 cents for the first mile and 40 cents thereafter, DTTC was making a larger profit than most other gas-powered cab companies in the city. The company exhibited one of its electric cabs at the 1915 Detroit auto show, along with popular electric car brands like the best-selling Detroit Electric, Rauch-Lang, Baker, and Waverly. Commonly featuring luxurious brougham coachwork, these vehicles combined for a small share of the overall market.

Besides superb economy, the electric taxis drove easily. By 1917, with 100 electrics in the fleet and with World War I causing a male labor shortage, women cabbies were hired at the same pay as men — but only for daytime shifts.

When not in use, the taxis were attached to charging poles at cab stands. This was known as “curb boosting.” But moments of repose were rare. “[Fares] were prepared to wait half an hour for [an electric], even though the company’s petrol cabs were waiting at the taxi stand,” writes the Dutch transportation historian Gijs Mom.

Besides serving the usual commercial and transit destinations, taxis swarmed outside dance halls and theaters to whisk people home at night. And as the Free Press reported, “The taxi is being used more and more by the lady who is in a hurry to do her shopping.”

Taxicab companies in St. Louis and Chicago soon deployed electric cabs. New York and Philadelphia operators also considered the move. There were 50,000 taxicabs nationally in 1919, when the Free Press noted high fares during a streetcar strike and grumbled, “The people of Detroit need taxicabs.”

After the war, gas engines became more refined and economical, and taxicab companies followed the trend. Checker Motors Corp. built about 4,500 gas-powered roomy cabs in 1923 at its factory in Kalamazoo. After being absorbed into GM’s truck division, Yellow Coach moved to Pontiac, where the line’s name changed to General Motors Cab.

By the mid to late 1920s, the electric cabs began to disappear from the streets of Detroit almost as quickly as they had emerged. db