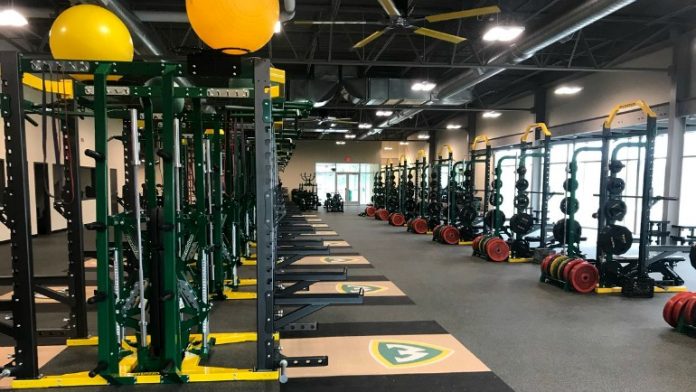 The facility is located between the Matthaei Building and softball complex and features new equipment, offices, a conference room, and a hydration and nutrition station. It was completed and opened in May.

“We had to get creative in the old facility because of the size,” says Ruben Mendoza, head strength and conditioning coach at WSU. “We could only train one team at a time, and for football, we had to split the team into three groups. The Athletic Performance Center is a game-changer for us and our student-athletes and how they train.”

The athletic department also spent an additional $150,000 on new equipment. The facility also includes old equipment. It has 24 workstations and can accommodate one large team, two medium-sized teams, or four small teams. It also has 16 inlaid platforms, which help to absorb the shock of some exercises, up from eight in the old facility.

Mendoza used to work at Notre Dame, which has 26 teams and a 14,000-square-foot facility. Wayne State’s new facility is almost as big and has only 17 teams.

The center is the latest in a list of athletics upgrades during the past decade that include the Harwell Field, Doris J. and Donald L. Duchene Sr. Indoor Facility, the basketball complex film room, softball facility, and a new football field and locker room. The center is the first upgraded facility that impacts all 17 teams.

The upgrades will change the way WSU athletes train, says Mendoza. They are also encouraging students to use the facility more.

“It’s a new and exciting thing, and it makes you want to be in the weight room even more,” says Ellie Rodriguez, a senior on Wayne State’s volleyball team. “You want to get in there because of all the new equipment and machines.