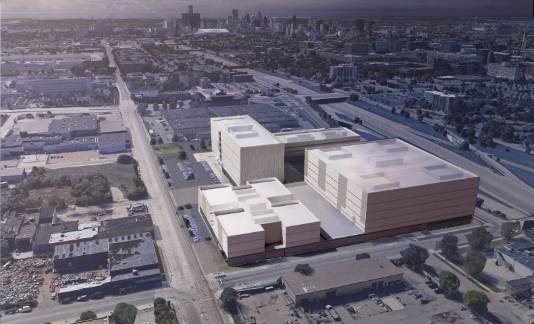 Wayne County and Rock Ventures today announced they have reached a tentative deal to build a $533-million criminal justice center at 1301 E. Warren Ave. in Detroit. The project will replace the “failed” jail site at Gratiot Ave. near I-375, that was stopped due to cost overruns.

In exchange, the county will sell the Gratiot site to Detroit-based  Rock Ventures, which plans to build a large mixed-use development on the triangular site along with neighboring land that includes two county jails, a juvenile detention facility, and the Frank Murphy Hall of Justice, all located north of Greektown.

The county is slated to invest $380 million with Rock Ventures to cover the remaining costs and any overruns at the E. Warren site. Construction is expected to be completed by mid 2022.

“We made the best of a tough situation and have a definitive path forward to address the failed jail project,” says Wayne County Executive Warren C. Evans. “It’s been an albatross for the county for far too long.

“At the end of the project, we will have an entirely new criminal justice complex, and most importantly, the county’s construction costs are capped,” Evans says. “We now know what we are going to pay and can budget accordingly. That better positions us to tackle other facilities and infrastructure challenges beyond our jails.”

The criminal justice center will house the county’s 2,280-bed jail, sheriff and prosecutor staff and administrative offices, criminal courthouse, and juvenile detention facility. The center will be built on property bounded by the I-75 service drive and E. Warren, which will be acquired from the City of Detroit.

Evans says the county will pay its portion of the construction costs with remaining bond proceeds from the failed Gratiot jail project, new bonds specific to the current project, and some general fund revenue.

“This agreement is an outstanding example of Detroit 2.0, where the public and private sectors partner together in a smart, cooperative and optimistic manner to find and implement the best outcome possible,” says Dan Gilbert, chairman of Rock Ventures. “The solution here not only fixes significant mistakes of the past, but at the same time delivers to the county a completely new, ground-up criminal justice center, in addition to resulting in a large, mixed-use development on the former proposed jail site.”

Rock Ventures, which is majority owned by Dan Gilbert, founder and chairman of Quicken Loans Inc. in Detroit, will tear down the failed jail site. The land and the surrounding buildings will be converted into office, residential, and commercials uses. At one time Gilbert and Tom Gores, majority owner of Palace Sports and Entertainment in Detroit, planned to build a soccer facility as part of the project, but last year they partnered with the Ford family to operate a MLS soccer team at Ford Field.

That plan has yet to be awarded a MLS franchise.