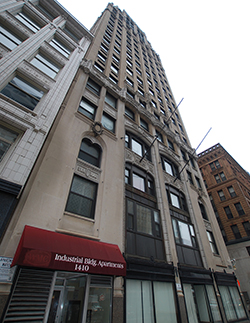 Detroit-based developer Roxbury Group has acquired the Industrial and Stevens apartment buildings in downtown Detroit, which offer a combined 165 units of senior affordable housing. Roxbury plans to renovate the buildings, which will remain affordable housing units for seniors, and add new retailers to the ground floor of both properties.

“We were committed from the outset to acquiring these properties so we could ensure that they remain affordable and dedicated to senior residents,” says Stacy Fox, a principal of the Roxbury Group.

The properties, which were acquired from long-time owner Gilbert “Buzz” Silverman, are located at 1410 and 1258 Washington Blvd. on opposite corners along the east side of Washington Boulevard at Grand River Avenue. Fox says the buildings were constructed in the early 20th century for offices and retail, and then were converted to senior housing in the early 1980s.

The taller of the two, known as the “Industrial” because of its original tenant, the Industrial State Bank, was designed by Detroit architect Louis Kamper, known for designing the Westin Book Cadillac Hotel and the David Broderick Tower. Fox says the Roxbury Group plans to re-name the building the “Louis Kamper.” 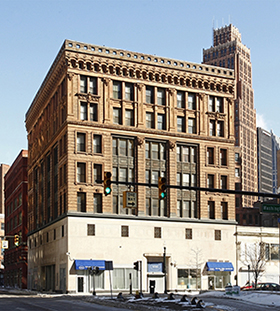 The Stevens Apartments, the older of the two properties, once housed the downtown branch of Manufacturers National Bank.

The Roxbury Group, in partnership with the Invest Detroit Foundation, a U.S. Department of Housing and Urban Development-qualified non-profit, plans to upgrade the buildings’ heating, cooling, and electrical systems, as well as add residential unit finishes and appliances; redo the lobbies and common areas; and complete roof and window repairs, among other projects. Fox says the Roxbury Group plans to activate the nearly 9,000 square feet of currently dormant first-floor retail in both properties.

The Roxbury Group and the Invest Detroit Foundation are pursuing tax credit support for the redevelopment of the properties through the Federal Low Income Housing Tax Credit Program. Renovations are expected to begin in a year.

“We’re very excited about these two properties because they join the growing redevelopment of Washington Boulevard,” says David DiRita, a principal of the Roxbury Group. “We started working to acquire these two properties more than 13 months ago, and we are very committed to working with the current residents to update these buildings.”

Other recent addition to Washington Boulevard include the David Klein Gallery, Level One Bank, and Painting With a Twist along with Roxbury Group’s redevelopment of the David Whitney Building into a 136-room Aloft Hotel, 105 residential apartments, WXYZ Bar and Re-Mix Lounge, and the upcoming Grand Cirque Brasserie.

The Roxbury Group also is building Griswold – Capitol Park atop a parking deck behind the Westin Book Cadillac Hotel. Offering 80 luxury apartments and designed by Kraemer Design Group in downtown Detroit, the project will open later this year.