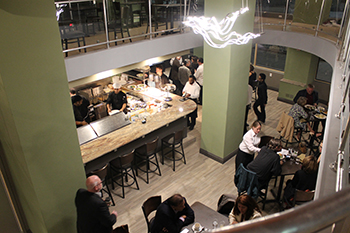 The Broderick Grille, a new restaurant on the ground floor of the David Broderick Tower at Woodward Avenue and Witherell Street, will open Tuesday and offer American fare including five different burgers, risotto with chicken or salmon, salads, appetizers, and other selections.

“We’re really looking forward to serving residents and office workers in the area, visitors to sporting, concerts, and cultural events, and, of course, Opening Day for the Detroit Tigers (on April 8),” says Michael Higgins, owner of the Broderick Tower. “We’ll be open daily from 7 a.m. to 9 p.m. for food service, and later in the evening for bar service.”

The 150-seat, 5,000-square-foot restaurant at 1570 Woodward includes a mezzanine level, an open kitchen, and a contemporary design. The menu, which offers an array of entrees such as pasta, pork chops, hanger steak done in a Mexican style, salmon, and chicken, was created by Chef David Parker, who has worked at Chandler’s in Petoskey, Bar Harbor in Bay Harbor, and Roast in downtown Detroit. Appetizers include hummus, salmon Rangoons, mac and cheese croquette, and buttermilk marinated chicken fingers. The five burgers are the Flame, Southwestern, Black and Bleu, Breakfast, and Classic. 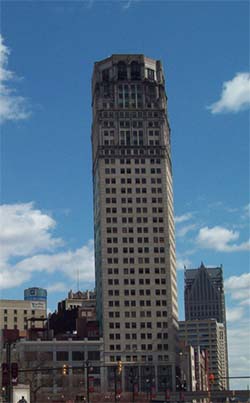 “We will add soups, desserts, and other menu selections in the coming weeks,” Higgins says. “Our breakfast items will be very quick, so people can come in, order what they’d like, and be out in minutes, or they can stay and sit down for breakfast. We have some other projects in the works, too.”

By June, Higgins will open the Broderick Tap Room in the lower level of the tower, which will offer simple American fare along with 38 different craft beers. In the fall, the lower level also will be home to La Cave, a wine bar offering a selection of French and other wines, premium liquor, and a small plates-style menu.

Later this year, Higgins will begin work to redevelop the historic Elliott Building, a seven-story structure at Woodward and West Grand River that will be converted into 23 one- and two-bedroom apartments along with retail offerings on the first floor and the lower level. Built in 1894 by developer William Elliott, it was home to the first S.S. Kresge five and dime store in 1899. The building is projected to reopen next year.

In turn, Higgins is working on preliminary plans to renovate the Leland House at Cass and Bagley into 300 one- and two-bedroom apartments, retail spaces, and a nightclub. The project is projected to be completed in 2018.