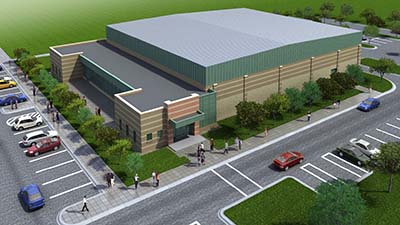 Rochester College will break ground next month on a new $5.3 million sports arena that will be the new home of its men and women’s basketball and women’s volleyball teams, as well as college events. The Garth Pleasant Arena is set to be completed next February.

“The addition of the arena will allow our teams to finally enjoy the excitement that only a true home court can provide,” says Klint Pleasant, the men’s basketball coach at Rochester College and son of Garth Pleasant, the arena’s namesake and the college’s men’s basketball coach from 1972 to 2011. “It will be a thrill for our student athletes to play in front of their classmates, professors, and staff mentors, as well as community friends.”

The one-story, 23,000-square-foot facility will be located on the north side of Avon Road between Livernois and Rochester roads in Rochester Hills. Fan capacity will be nearly 900, while maximum capacity including floor seating will be more than 1,500. The facility will also include VIP seating.

Along with sporting events, Rochester College plans to hold community and civic events, campus gatherings, and graduation ceremonies in the arena.

“This arena will be the heart of student life at Rochester College,” says Jaymes Vettraino, director of the center for social entrepreneurship at the college, who is overseeing the arena’s construction.

Rochester-based Frank Rewold and Son Inc. will build the facility. The company has also completed various renovation projects at The Palace of Auburn Hills and at Henry Ford Community College. Rochester-based French Associates architectural firm designed the arena to complement the aesthetics of the college’s Richardson Academic Center.

Rochester College is also in the process of creating a park at Lake Norcentra on its campus, which includes the addition of a bike parking and repair station, boat and fishing access along the Clinton River, as well as the demolition of an existing maintenance building to make room for events and recreation programs.