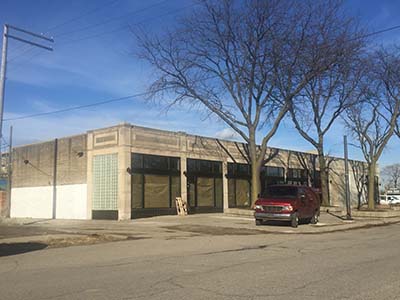 The Detroit Optimist Society, the restaurant group that includes Wright & Co., The Sugar House, Honest John’s, and Café 78 at MOCAD, will debut their newest creation, The Peterboro, the week of March 14 on Peterboro Street, just west of Cass Avenue, in the heart of Detroit’s Midtown district.

Set in a former grocery store, the décor of the 72-seat eatery will be rustic industrial with a nod to classic Chinese restaurants, and will include a restored terrazzo and concrete floor, a horseshoe-shaped bar offering 18 seats, and a new twist on Chinese-American food, says Dave Kwiatkowski, a partner in The Peterboro with Chef Marc Djozlija, and managing partner, Charles Inchaustegui.

“We’re taking some of the classic Chinese American dishes and reshaping them,” says Djozlija. “As you may know, almond boneless chicken was invented here (at the former Chung’s Restaurant in what was Detroit’s second Chinatown district, the first was near Bagley and Third). We’ll also offer Chinese roast pork, crab Rangoon, salt and pepper shrimp, and a number of other dishes.”

The Chef de Cuisine is Brion Wong, formerly of Antietam along Gratiot Avenue, south of Detroit’s Eastern Market. After leaving Antietam last year, Wong was one of the participating chefs in Savor Detroit, a weeklong dinner series held the last week of April (April 25-29) and the first full week of October (October 3-7) at the Great Lakes Culinary Center in Southfield.

The Peterboro is set within a 2,400-square-foot space that will include a banquet. A 30-seat patio will open in the coming months. The eatery will be located at the west end of an L-shaped series of adjoining buildings that border Peterboro and Cass.

In recent months, the emerging commercial and dining center has seen the addition of 8 Degrees Plato, a craft-beer store and bar that also offers ciders and meads and has a location in Ferndale, and Iconic Tattoo and Body Piercing. Across Cass is the Burton Theatre.

Kwiatkowski says the cocktail menu will feature four daily offerings, complemented by Saki and sherry selections, local and international beers, and different wines such as a pineapple fermented wine. “We’ll have a good selection of drinks that pair well with spicy food,” he says.

The Detroit Optimist Society also plans to open a small speakeasy in the coming weeks at The Albert, a recently renovated residential and retail structure in Detroit’s Capitol Park (located behind the Westin Book Cadillac Hotel). “We tried to get The Peterboro open for Chinese New Year’s, but we will have a big party next year,” Kwiatkowski says.