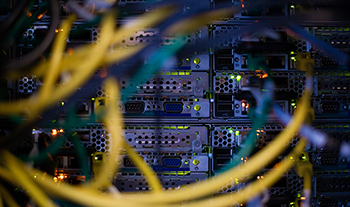 Researchers at Michigan State University have developed a superconducting magnetic memory element for supercomputers — used in the field of computational science for such tasks as oil and gas exploration and climate research — that lowers heat generation and power consumption compared to conventional alternatives.

“Supercomputers consume enormous amounts of power in exchange for their computational abilities,” says Norman Birge, a professor of physics at Michigan State and co-author of the research paper.

Birge says the new magnetic memory element could use 10,000 times less power than conventional semiconductor circuits, so that after cooling is taken into account, the final efficiency will be 100 times less power for the superconducting supercomputer.

“One of the major impediments to superconducting computing technology had been the lack of an efficient memory that took advantage of the superconducting state,” says Eric Gingrich, a physicist at Northrop Grumman Systems Corp., a global aerospace and defense company, who was the lead student on this project while he was attending Michigan State. “This project has demonstrated experimentally a solution to that problem, and brings the technology one step closer to being realized.”

The study is published in the journal Nature Physics.