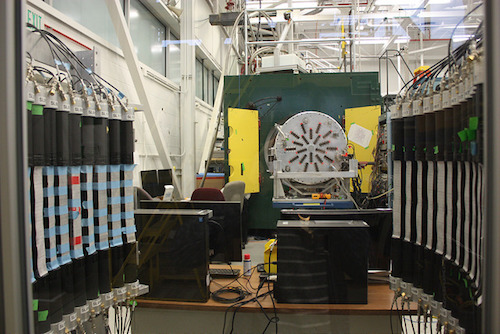 A cooperative agreement between Michigan State University and the National Science Foundation will result in up to $122.5 million in continued funding over five years for the school’s National Superconducting Cyclotron Laboratory.

The agreement will fund research in nuclear and accelerator science and the continued operation of the laboratory, which works to provide hands-on learning opportunities for nuclear scientists.

“This cooperative agreement from the NSF allows us to continue enabling cutting-edge scientific research into the nature and origin of atomic nuclei,” says Brad Sherrill, university distinguished professor of physics and director of the National Superconducting Cyclotron Laboratory.

The laboratory provides beams of rare isotopes — short-lived versions of the elements not normally found on Earth that have potential applications in areas such as healthcare and security — for basic atomic nuclei research.

The agreement will also provide funding to operate a newly built, smaller linear accelerator, which will allow researches to re-accelerate rare isotopes in the school’s Facility for Rare Isotope Beams, which is under construction with an projected completion in 2022, according to university officials.

The Physics Division of the National Science Foundation has supported the National Superconducting Cyclotron Laboratory operation at Michigan State since the mid-1980s.

Ten percent of all nuclear science Ph.D.s awarded in the United States are based on research carried out at the National Superconducting Cyclotron Laboratory. In addition, more than 100 undergraduate students are actively involved in research at the lab every year.