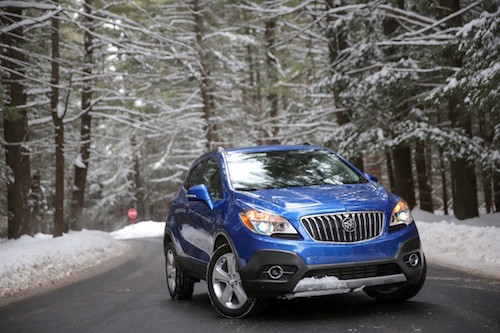 Among individual vehicles, the Buick Regal and Encore were up 42 and 35 percent. The brand had its best year to date retail performance since 2005.

The Cadillac Escalade saw an 24 percent increase, and had its highest sales in November than any other month this year.

For GMC, the Sierra and Canyon increased sales by 14 and 43 percent. Sales for the Yukon, Yukon XL, and Acadia also rose, up 22, 19, and 4 percent respectively.

The Chevy Malibu and Volt saw a 24 and 25 percent increase. The Malibu experienced its best November since 1997, and the Volt had its best sales ever. The Silverado and Colorado were up five and 39 percent respectively, while the Suburban, Tahoe, Equinox, and Trax went up six, 12, seven, and 47 percent, respectively. Along with the Volt, the Trax and Equinox had their best Novembers ever.

“GM’s November performance reflects the continued strength of our U.S. business,” says Kurt McNeil, vice president of US Sales Operations at GM. “We are ahead of plan, selling down our 2016 model year inventory, and we expect to close out December with more retail share growth.”

Company officials with Ford say its sales growth was driven by a 10 percent retail sales gain with 154,114 vehicles sold.

“Strong retail sales increases for both F-150 and our all-new Super Duty pickups drove F-Series above the 70,000 vehicle mark – a November threshold we have not seen in 15 years,” says Mark LaNeve, vice president of U.S. Marketing, Sales, and Service at Ford.

Contributing to its 14 percent decrease, FCA’s retail sales of 126,780 units were down 2 percent year-over-year in November, representing 79 percent of total sales for the month

The company’s Fleet sales of 34,047 units were also down 42 percent year-over-year in November as FCA US continues to reduce its sales to the daily rental segment. Fleet sales represented 21 percent of total FCA US sales in the month.

Ram truck brand sales rose 12 percent in November versus the same month in 2015. ProMaster van sales increased 126 percent, while Ram pickup truck sales were up by 8 percent. The Jeep Renegade and Fiat 500 also saw an increase, with a 30 and 18 percent sales gain respectively.

Sales for the 2017 Chrysler Pacifica, which was launched earlier this year, rose 13 percent compared to October.