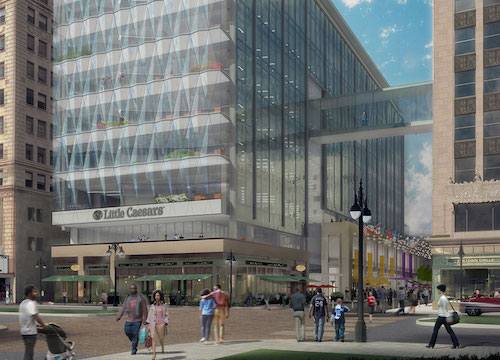 Little Caesars and Olympia Development of Michigan broke ground today on the new $150 million Little Caesars world headquarters campus expansion in The District Detroit. Expected to be completed in 2018, the expansion is Detroit’s first newly constructed corporate headquarters building in more than a decade.

“Today’s groundbreaking represents the next chapter of global growth for an iconic Detroit brand, founded by my parents, Mike and Marian Ilitch, in 1959 with a single store,” says Christopher Ilitch, president and CEO of Ilitch Holdings Inc. “My hope is that our growth, commitment, and continued investment in our community and its people will serve as a catalyst for others to call Detroit and Michigan their home.”

Located on Woodward Avenue at Columbia street, the nine-story, 234,000-square-foot expansion will feature a two-story lobby, a glass covered open terrace, a fitness center, retail and dining space, a 425-seat training room, kitchens that are quadruple the size of the company’s current facilities, and a glass façade in the shape of 14-foot-tall pizza slices. 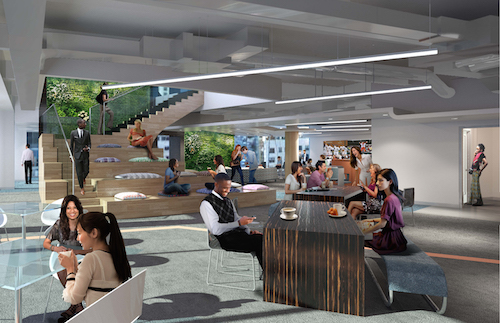 “It’s great to see Detroit-based companies taking the lead on this major project, which will result in employment opportunities for hundreds of our residents,” says Mayor of Detroit Mike Duggan.

This expansion to the Little Caesars world headquarters campus will be The District Detroit’s largest new construction to date in the Columbia Street neighborhood, which is also home to the Fox Theatre.

Founded 57 years ago by the Ilitch family, Little Caesars, the largest carryout-only pizza chain in the world, moved to the Fox Office Center in 1989. The company has a presence in all 50 states and 20 international markets, and recently opened franchises in Dominican Republic, Costa Rica, and Panama.