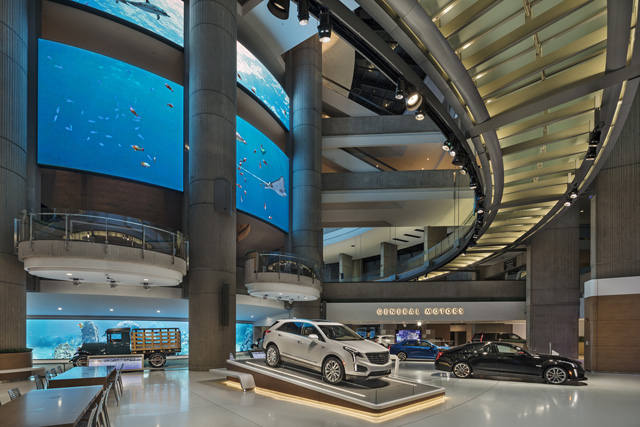 General Motors Co. has started to open GM World, a new experiential installation in the atrium of its global headquarters at the Renaissance Center in downtown Detroit.

Spanning five stories, the space includes 17 large-scale LED surfaces that are fed by an artificial intelligence-driven Interactive Content Engine (ICE) capable of delivering an infinite array of branded content, resulting in unique experiences in the space every day.

The experiential development welcomes both visitors and employees with a visual brand voice interspersed with immersive contents, all of which is paired with GM vehicle displays throughout the atrium.

Engineered over the past two years, the project is a collaboration between GM, Neumann/Smith Architecture in Detroit, EWI Worldwide in Farmington Hills, and MODE Architectural in Seattle.

“This historic development fuses architecture with stunning, future-forward media applications to showcase the themes of craftsmanship, community, innovation, Detroit, and the future of humanity,” says Chuck Bajnai, chief creative officer of EWI Worldwide. “At GM World, every moment of every day, those who visit will find themselves immersed in the values and culture of General Motors in profound and uplifting ways.”

With EWI serving as creative agency and fabricator, and MODE leading creative development for the media and interactive features, the partnership was led by Nicole Jankowski, marketing manager of GM World. Along with executives at GM Design and Neumann/Smith, other principal players include GMIT for system design and integration, and Ant Farm for media production and post-production.

GM leadership mandated the space change its identity often; for example, the opening of the space corresponded with the celebration of Chevrolet’s 100 Years of Trucks. With this as a core theme, the objectives were to combine cinematic sequences, custom brand pillar experiences, and the immersive assets created for auto shows for GM and its Chevrolet, Cadillac, Buick, and GMC vehicles.

“Naturally, a great deal of attention went into creating all of the screen content for GM World, where the stories of GM’s roles as innovators, environmental stewards, and manufacturers are crafted at the highest standards, and then made immersive,” says Bob Bonniol, principal of MODE.

As media content creative director and producer, Bonniol worked with EWI and his frequent collaborators at Ant Farm, melding original live-action production with animated content, all of which was mastered to resolutions exceeding 28k.

“One of my very favorite things about working with the team at GM is their consistent willingness to push creative limits,” Bonniol continued. In addition to the brand pillar content, eight themed productions were brought to life, taking over the entire space with vision and atmosphere. Examples include the Rube Goldberg-inspired “Rube,” a peaceful immersion into an old growth “Forest,” and “Crankshaft,” a sophisticated, cinematic vignette transforming a giant engine into a heartbeat of action at a massive scale.

As a next step, Bonniol and his colleagues addressed the challenge of managing a vast array of premium content, while new software was developed to deliver performances that are curated by machine learning, while also providing far-reaching programming capabilities for human curators.

For instance, on any given day, a curator might choose to exclusively showcase the Chevrolet brand, with an emphasis on trucks and common activities for truck owners.

“At any given time, the ICE is able to sort through its entire library and select clips matching the relationships defined by all parameters it’s given,” Bonniol says. “It then assembles them artfully – which is where it has to be intelligent. Applying a variety of rules to edit clips together, ICE creates live mosaic edits of the sequences that play out across the 17 screens.”