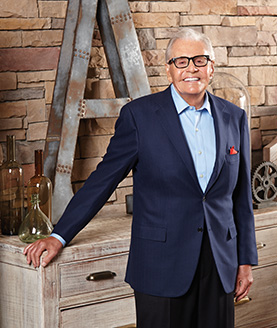 Art Van Elslander, founder and former chairman of Art Van Furniture Inc. in Warren, one of the most iconic and successful home furnishing and bedding companies in the Midwest, passed away today. He was 87 years old and had recovered from cancer but died of complications related to the disease. Funeral arrangements are still pending.

One of the most generous philanthropists in the region, including providing sponsorships and gifts to The Parade Co., St. John Providence Health System, and the Solanus Casey Center, all in Detroit, Van Eslander was born in the Motor City. For many years, he rode in America’s Thanksgiving Day Parade Presented by Art Van in Detroit.

Van Elslander, who opened Art Van Furniture in 1959, in January 2017 sold the company to Thomas H. Lee Partners, a private equity firm in Boston. At the time of the sale, Art Van operated more than 100 stores in five states and had around 3,700 employees. Terms of the deal were not disclosed.

Van Elslander started his furniture company at a single store on Gratiot Avenue in Detroit (now Eastpointe), and enjoyed success and notoriety with special sales at the Michigan State Fairgrounds, then in Detroit.

After selling the furniture company, Van Elslander founded and was chairman of Van Elslander Capital, an investment company in downtown Birmingham that is building an 11,000-square-foot office building at the corner of Woodward Avenue and Oak Street that is projected to open this summer.

Van Elslander’s son, Gary Van Elslander, is president of the investment firm. “I can hardly remember a time when Gary and I haven’t worked together,” said Van Elslander last year.

In a note to employees, Art Van president and CEO Kim Yost, said Monday that Van Elslander died during the night. Yost called his former boss a “brilliant, larger-than-life visionary who devoted his life to family, business, and community touching lives around the world.”

Detroit Mayor Mike Duggan issued the following statement today about Van Elslander’s passing: “The City of Detroit lost one of its greatest supporters and philanthropists today. Furniture may have been Art Van Elslander’s business, but Detroit always has been his heart.

“Art’s kindness and generosity seemed to have no limits. Thanks to his support, families across metro Detroit and the nation are able to share in the annual tradition of America’s Thanksgiving Day Parade. Our premature and critically-ill newborn babies are being given the best chance at a healthy life at the Mary Ann Van Elslander Neonatal Intensive Care Unit at St. John Hospital and Medical Center. And his extraordinary pledge of $20 million for the Solonus Casey Center will help to revitalize another city neighborhood.

“There will never be another ‘Art Van.’ He will be terribly missed and fondly remembered.”

“On behalf of the Michigan Thanksgiving Parade Foundation Board of Directors, we extend our deepest sympathies to the Van Elslander family. Art Van was a true force in our community and we will greatly miss his tireless commitment to the Parade and the many remarkable things he made possible throughout our region and state.”
— Dan Loepp, chairman, Michigan Thanksgiving Parade Foundation and President and CEO, Blue Cross Blue Shield of Michigan

“We are deeply saddened by the passing of Art Van Elslander. He was larger than life in everything he touched and we are incredibly fortunate to have had him as a close friend, supporter, and part of The Parade Company family for 30 years. We are forever grateful for his impact on our city, the Parade, and in all of our lives. His legacy will live on in Detroit and throughout the country with America’s Thanksgiving Parade presented by Art Van.”
— Tony Michaels, President and CEO, The Parade Company