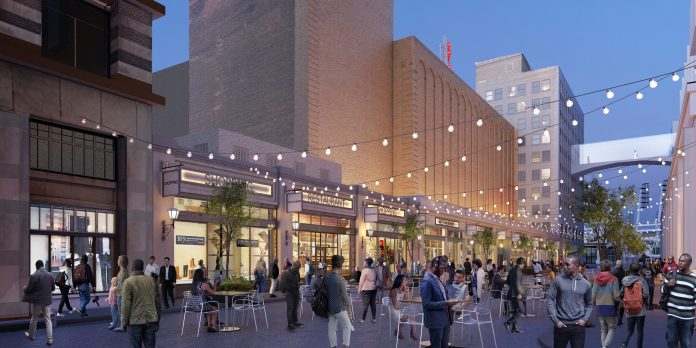 Olympia Development of Michigan in Detroit is set to open Columbia Street, a mixture of 10 retail stores and restaurants set on the ground floor of the historic Fox Theatre and Office Building and the upcoming world headquarters for Little Caesars Pizza, this year. The European-style street is located between Woodward and Park avenues.

The $150-million, nine-story headquarters for Little Caesars Pizza is set to open in the summer and offer 235,000 square feet of space for around 700 employees. The building will be connected to the Fox Office Building via a skywalk.

“Columbia Street will be an exciting destination for sports fans and visitors,” says Arbogast, who provided an update on the project at last week’s International Council of Shopping Centers, Michigan Chapter winter meeting at Suburban Collection Showplace in Novi.

Columbia Street is one of five neighborhoods within The District Detroit, a 50-block area that spans downtown and Midtown and includes Little Caesars Arena, Comerica Park, Ford Field, and the upcoming Mike Ilitch School of Business building at Wayne State University (opening in the spring at the southwest corner of Woodward and Temple Street).

According to the University of Michigan, The District Detroit will account for an economic impact of more than $2 billion by 2020 and create more than 20,000 construction and construction-related jobs and 3,000 permanent jobs.

For more information about leasing opportunities at Columbia Street and The District Detroit, email leasing@districtdetroit.com.