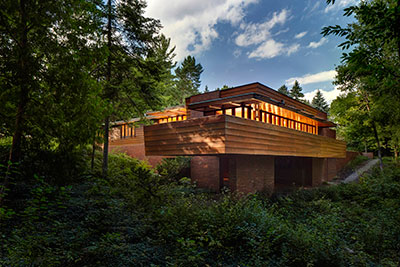 Known for his geometric designs and multistory architecture, three homes in metro Detroit designed by Frank Lloyd Wright, characterized by their natural materials and flat roofs, will be the focus of a tour next month organized by Lawrence Technological University. They are the only three of their kind in metro Detroit.

“These (houses) are quite emblematic of what is known as the Usonian home, which was Frank Lloyd Wright working hard to understand how a house might be (situated) in this landscape, or in this region,” says Scott Shall, a professor and interim assistant dean of architecture and design at Lawrence Tech.

Shall says the homes are referred to as Usonian, a term used by Wright to describe his vision for designing affordable middle class, single-family residences. Wright began designing Usonian houses in the 1930s, utilizing native materials such as wood and stone. The houses provide natural heating and cooling.

“(Wright) believed in using local materials and natural heating and cooling,” says Matt Roush, director of media relations at Lawrence Tech. “Back when he was designing houses, air conditioning was not common so they had features to move air through the houses to keep it as cool as possible.”

On the tour, the Dorothy H. Turkel House, built in 1955, is the only Usonian house in the city of Detroit and was the inspiration for Wright’s book, The Natural House. It is located along Seven Mile Road, west of Woodward Avenue.

The tour will take place on June 4, four days before Wright’s 149th birthday. Tickets are $150 per person with a portion of the proceeds to benefit restoration projects at the Affleck House and the Smith House, now owned by the Maxwell and Sara Stein Smith Foundation.

More information on tickets can be found here.

The Atlas Lofts to Open in Eastern Market in 2022