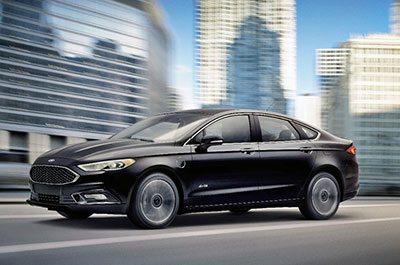 Ford Motor Co. today unveiled the 2017 Fusion Energi, a plug-in hybrid that it says can travel 610 miles on a full tank of gas and a battery charge. At that distance, the sedan offers the longest combined range of any hybrid of its type sold in America, the automaker says.

“Fusion Energi, with a full battery and a full tank of gas, can go from San Diego, through Los Angeles, and all the way up to San Francisco and still have up to 110 miles of range remaining,” says Wade Jackson, Ford Fusion’s marketing manager.

The new Fusion’s extended range is the result of changes made to the car’s hybrid powertrain software and regenerative braking, which recycles energy to the battery otherwise lost when drivers hit the brakes. In comparison, the 2016 model had a range of 550 miles.

The 610-mile range of the 2017 model is nearly triple that of the upcoming Tesla Model 3, which has a projected total range of 215 miles, Ford notes. The Tesla model runs solely on battery power, requiring it to be recharged immediately after depletion.

Plug-in hybrids such as the Fusion Energi use both electric batteries and gas-powered engines. The model’s all-electric range is an estimated 21 miles. If there is fuel in the tank, the car will then operate for about a mile using both battery and gas. After that, the fuel engine will operate for another 588 miles of range on one tank, according to EPA estimates.

Ford was the top seller of plug-in hybrids for 2015, and year-to-date for the 2016 model year. Through April, Fusion Energi sales were up 58 percent.

Since introducing the plug-in hybrid vehicle in 2013, Ford has sold nearly 30,000 Fusion Energi cars in the United States.