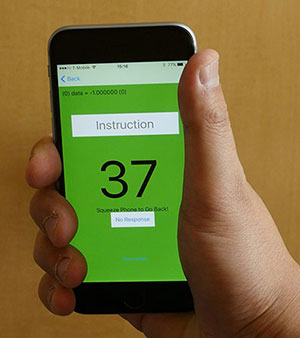 Two University of Michigan engineers have developed software that allows smartphones to sense force or pressure on its screen or body. The software, called ForcePhone, offers users a new way to enhance mobile devices without adding hardware components.

“You don’t need a special screen or built-in sensors to do this. Now this functionality can be realized on any phone,” says Kang Shin, a professor of computer science at U-M’s Department of Electrical Engineering and Computer Science in Ann Arbor. “We’ve augmented the user interface without requiring any special built-in sensors.”

Shin created the system with Yu-Chih Tung, a doctoral student in the same department. The software, for example, allows users to dial 911 by squeezing a smartphone in a certain pattern, or by using a pattern to turn on music.

ForcePhone works by utilizing a smartphone’s microphone and speaker. The software sets the speaker to emit an inaudible tone at a frequency higher than 18 kHz. Although silent to the human ear, the phone’s microphone can detect the vibration caused by the sound.

When a user presses on the screen or squeezes the phone’s body, the force changes the tone. When the phone’s microphone detects the change, the software translates the tone into commands.

“Having expensive and bulky sensors installed into smartphones can solve every problem we have solved, but the added cost and laborious installation prevent phone manufacturers from doing it,” Tung says. “Our sound-based solution can fill this gap, providing the functionality without making any hardware modification.”

The idea came to Tung after seeing the 2008 Batman movie, #The Dark Knight.# In the film, Batman turns smartphones in Gotham City into a sonar system using high-frequency audio signals to track the Joker.

Tung and Shin will present ForcePhone on June 27-29 in Singapore at MobiSys 2016, a conference hosted by the Association for Computing Machinery’s International Mobile Systems and Applications.