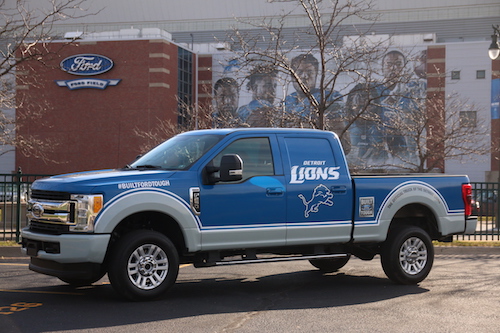 “Football – just like Ford trucks – is about being tough, smart, and capable,” says Mark LaNeve, vice president of U.S. Marketing, Sales, and Service at Ford. “But what really makes football great are the fans, just like our own hardworking customers.”

On Thursday, the tour will host a tailgate at the Detroit Fire Department Engine Co., located at 433 W. Alexandrine St., for the entire station and their families. Five trucks will be on site with custom tailgate games, prizes, giveaways, and a tailgate-inspired lunch. Former Detroit Lion Herman Moore, the Lions cheerleaders, and Roary the team’s mascot will be on site. Game tickets will also be raffled off for the Lions game on Sunday.

Fans can enter to win a Ford Toughest Tailgate visit on Friday from 11 a.m. to 2 p.m., which arrives in a new F-Series Super Duty and includes delivery of chef-made, tailgate-inspired dishes, game tickets, and an NFL Shop gift card.

The promotion can be accessed through the Uber app by entering the promo code ‘FORDTOUGH’ followed by the city name and requesting the ‘TAILGATE’ option. Select individuals who connect with a driver will receive the delivery.

Prior to the Lions’ game on Sunday, a Built Ford Tough Toughest Tailgate will also be held in Lot 5 of Ford Field. One local member of the FordPass smartphone app will have the opportunity to attend the event and the game.