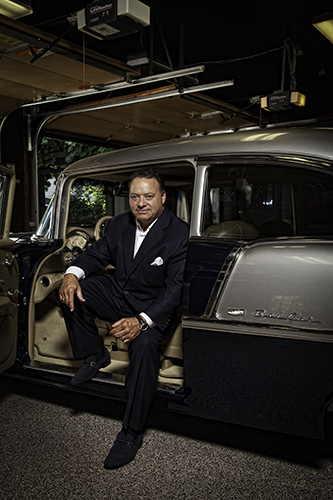 Tom Celani, co-owner with Joe Vicari of Luna Hillside, parent company of the Freedom Hill Amphitheatre in Sterling Heights, spoke to DBusiness Daily News about changes at the concert and banquet facility and its inaugural Cars & Cigars fundraising event on Thursday.

TC: We’re opening up on June 13 with Diana Ross. We’re very excited to have one of the Motown legends coming back to Detroit for our opening night. One of the big things that we’ve done for this year was (remove) the first 500 seats and replace them with new leather seats, sponsored by Crest Lincoln Mercury (of Sterling Heights). You know when you go to The Palace and the first couple of rows have beautiful seats? We have 20 rows of those for our corporate customers and season ticket holders.

TC:(Cars & Cigars) is the first charity event we’ve done through the Celani Family Foundation, which has been around for a few years. We have 650 people attending, it’s sold out. It has a 1950s Latin theme because when they put those embargoes (against Cuba) in place in the United States, the last (American) cars that went over were from the 1950s. So they’re still driving ’50s Chevys in Cuba right now. We’re having one of the greatest trumpet players in the world come in: Arturo Sandoval, who left Cuba and he was so important in the ’90s that Andy Garcia played him in a movie (The Arturo Sandoval Story). We’re thinking about hosting a similar event next summer.

3. DDN: Where will the proceeds from the event go?

TC: I was inspired last Thanksgiving, when I read that the UAW ran out of turkeys for (families in need). I said to myself, “We need to do something.” And this idea came together to do Cars & Cigars. Half of the proceeds will go toward our goal of buying 5,000 turkeys and donating them to the Capuchins so that they can get the turkeys to the right people. The other half will go toward the (the Fuente and Newman families’ Cigar Family Charitable Foundation’s) school in the Dominican Republic.

4. DDN: How did you find out about the school?

TC: I was down in the Dominican with the Fuentes (of Arturo Fuente Cigar Co.) in January and they asked if they could take me over to this school they had started about 10 years ago. They had their first graduating class (in 2009) and about 90 percent have gone on to college. I was inspired by this and said, “I’d love to do something for you, Mr. Fuente.” So they’re coming to Detroit this Thursday for our big event.

5. DDN: Why did this strike a chord with you?

TC: I see some things that they’re doing that need to happen in Detroit. One of them is the success of the children. Every child had a social worker — that’s what they call them — attached to them, and that social worker has about 10 families that they have to visit every week to make sure what the children are learning in school is also being supported at home. The schooling is free, and the kids want to be there, but they still have to be supported at home. That’s the thing that we’re lacking in Detroit. We can get the kids in the school, but we don’t have that next step (to ensure) they’re supported at home. And I see that being the key factor of their success.