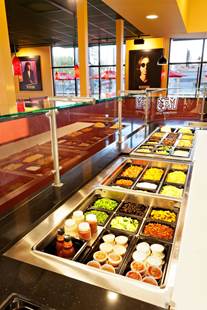 The opening of a Moe’s Southwest Grill in Royal Oak on Thursday signifies the kick off of a larger expansion for the fast-casual restaurant franchise. By the end of next year, restaurateur Jim Bagley will have added locations in Utica, Troy, and Ann Arbor.

“I’m eager to open the doors so guests here can make Moe’s Southwest Grill a part of their community,” says Bagley, who owns a Moe’s in East Lansing.

Of the 500-plus Moe’s locations — known for their burritos and southwest food fare — across the country and abroad, seven are operating in Michigan, mainly along the west side of the state. However, that’s something Steven Corp, vice president of the company’s franchise sales, hopes to see change.

“Detroit is one of the last big (designated market areas), and certainly the state of Michigan included, east of the Mississippi, where we still have some availability to grow the brand,” Corp says. “For the past few years, we’ve been growing where we are. It’s better to cluster around and grow (outward) rather than put one restaurant in Denver and another one in Phoenix.”

Corp adds that Moe’s is particular about who it brings on as franchisees, and looks for people who are a good fit financially, operationally, and culturally. Last year, the company received about 2,500 inquiries and sold 160 franchises. “They’re going to sign a 20-year license, so there’s got to be a relationship there. It’s a two-way street,” he says.

On Thursday, Moe’s in Royal Oak, at 32867 Woodward Ave., restaurant will offer $3 burritos to celebrate the opening day. A portion of the proceeds will benefit Food 4 Kids, a non-profit organization that supports programs that help put an end to childhood hunger.