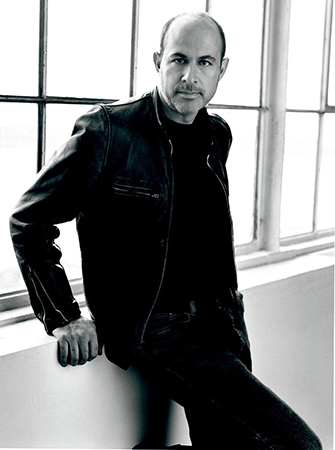 Construction is under way on the ground level of the brick and brownstone building, known as the Wright Kay Building, between Grand Circus Park and Campus Martius Park on the northeast corner of Woodward Avenue and John R. The nearly 4,000-square-foot shopping destination is slated to open next spring.

Varvatos announced the new Detroit store today on CNBC’s Squawk Box with Dan Gilbert, founder and chairman of Quicken Loans and its family of companies.

“It’s way more than momentum now — something big is happening,” says Varvatos. “For me, this is much more than a business opportunity. This is also about changing the complexion of a great city and creating a different kind of legacy.”

Varvatos was born in Detroit and grew up in Allen Park as part of a big, Greek family (along with his parents and five brothers and sisters). He attended Allen Park High School, Eastern Michigan University, and the University of Michigan. The award-winning designer credits his Detroit-area upbringing and Motown, rock ‘n’ roll, blues, jazz, and punk music influences as some of his inspirations. In 2013, Varvatos released a limited edition Chrysler 300 in his name, a nod to his Motor City roots.

“You feel the electricity downtown. It just touches a chord with me,” Varvatos says. “I’m part of a community of designers that really need to know about Detroit. This is the city in America to watch right now. This will not be the last thing we do in downtown Detroit. We’re already brainstorming about other opportunities.”

Members of the Bedrock Real Estate Services team first pitched the idea of a new Varvatos retail store in Detroit at a December 2013 real estate conference. The following year, Varvatos and his CEO, Christiano Quieti, came to town for a whirlwind tour to scout out locations. They quickly fell in love with the city and the historic, six-story Wright Kay Building, built in 1891. Following a second visit, they signed a lease in August. The boutique is the first high-end designer fashion retailer in decades to open a permanent storefront in downtown Detroit. The store will carry Varvatos’ complete menswear line.

“To have a world renowned designer like John Varvatos choose downtown Detroit for his first Midwest store shows the confidence that specialty retailers have in the future of the city,” Gilbert says. “The creative class has played an important role in Detroit’s history and it only makes sense for a fashion-icon like John Varvatos to return to his hometown and play a significant role in igniting Detroit’s fashion community.”

“Varvatos is setting the tone for the bustling shopping district that will grow along Woodward Avenue,” says Dan Mullen, vice president of leasing and development for Bedrock Real Estate Services. “This is exactly the type of retail we’ve been looking for. His store will help us recruit other like-minded brands that will create the ultimate destination for downtown.”

Other signature tenants in the building include Wright & Co. restaurant, Hudson Edit/Avalon Films, Neumann/Smith Architecture, and the technology-consulting firm C/D/H.

Robin Schwartz, a former anchor and reporter at FOX 2 (Channel 2), is director of public relations for Bedrock Real Estate Services in downtown Detroit, which brokered the deal.