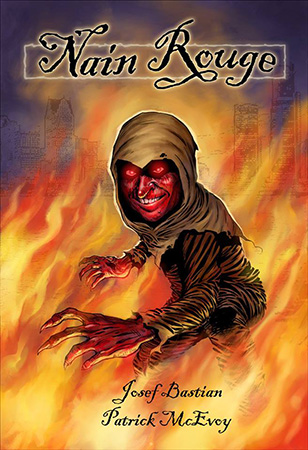 Royal Oak-based Folkteller Publishing is bringing the Nain Rouge to life with this week’s release of a graphic novel that fleshes out the story of the mythical creature that cursed the city of Detroit starting in the early 18th century.

The full-color novel makes way for a short film, Nain Rouge: The Curse, set to begin production in Detroit and across the region next year. Both projects follow the July release of the third and final book of the Nain Rouge trilogy, called Nain Rouge III: The Red Truth.

“It was interesting to find this obscure legend — a lot of people in Detroit don’t even know about it — and bring it to life,” says Carl Winans, co-owner of the publishing firm. “With the short film, we’d like to do a prequel that tells the back story and (serves) as a stepping stone to get the feature film made.”

Winans and co-creator Josef Bastian, author of the Nain Rouge trilogy, say the creation of the red dwarf’s appearance was inspired after Martin Klebba, a Troy-native and actor, who has been in films including Pirates of the Caribbean and Project X. Although Klebba has not officially signed on for the short or feature films, he did star in a video for the Kickstarter campaign that helped to fund the graphic novel.

The Folkteller duo is developing an app that will serve as a platform for the publishing company, expected to launch next year. In addition to providing access to novels and short films, the application will include interactive content determined by a user’s geographic location.

“We’re going to find local legends that we can either bring to life, or work with other authors (to introduce),” Winans says. “Based on where you are, the app may say, ‘You happen to be in New Jersey, (which is the home of) the New Jersey Flasher.’”

The Nain Rouge graphic novel — being released and distributed in partnership with Caliber Comics — is now available via the company’s website at folktellerstories.com. It will begin arriving in select comic book stores this month.