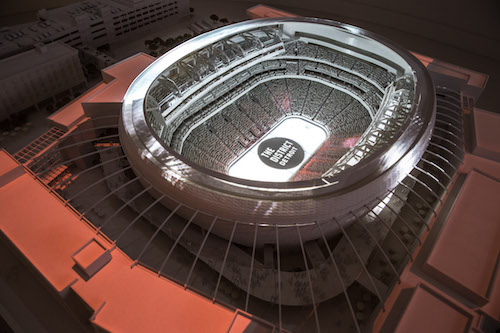 The Detroit Red Wings Ticket Service Department is about halfway through the process of reseating 3,500 Joe Louis Arena season ticket holder accounts at Little Caesars Arena, the $627.5-million, 20,000-seat venue that is scheduled to open at Woodward Avenue and Henry Street in The District Detroit next September.

The reseating process for season ticket holders moving from Joe Louis Arena into the new Little Caesars Arena next season began in May and includes a VIP tour of the 10,000-square-foot District Detroit Preview Center, in the northwest corner of Comerica Park.

More than 1,600 tours have been conducted to date. The Red Wings have approximately 1,900 more season ticket accounts to get reseated in the new arena, and the team expects to complete the entire process in spring 2017.

So far, the team reports every 100 level season ticket holder (lower bowl) has been reseated at Little Caesars Arena, and the staff is now working on reseating mezzanine and 200 level ticket holders (upper bowl).

The Preview Center includes a 3D, 109-square-foot model of downtown Detroit from Comerica Park to Motor City Casino, a 600-square-foot replicate of a suite at Little Caesars Arena, three authentic Red Wings lockers, memorabilia, a historic Zamboni, a 42-square-foot model that presents a detailed look inside the arena, and an inventory system with suite options plus sponsorship and season ticket opportunities.

“We wanted (our season ticket holders) to appreciate and understand through education what their experience will be like on game day,” says Jennifer Arapoff, marketing and communications director for Olympia Entertainment, which owns Little Caesars Arena. “We just didn’t want to announce in a very generic way, ‘Here’s where your seats will be.’ We wanted to immerse them in the arena experience through the models and virtual experience on where their seats will be on a very personal level.”

For those unable to make the tour, season ticket holders can go online to reserve seats and view a virtual 360-degree tour of the arena, including seating arrangements. There are no additional costs for ticket holders during the reseating process.