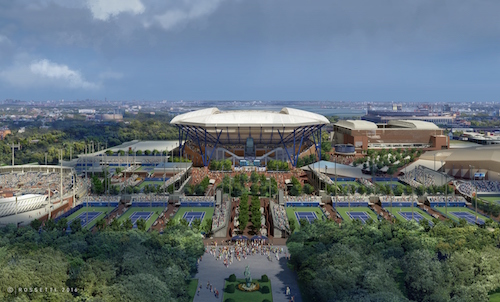 Rossetti, a Detroit-based architecture and design firm, has partnered with the United States Tennis Association for a $550 million construction project within the New York-based National Tennis Center stadium, home to the U.S. Open.

Rossetti officials say the project originates from an effort that was initiated in 2010 and is expected to be complete by the 2018 U.S. Open.

Rossetti is working with the association to design an octagon-shaped retractable roof for the center’s Arthur Ashe Stadium; a new 8,125-seat, 125,000-square-foot space called the Grandstand Stadium; and new tournament courts located on the south side of the campus.

New hospitality and entertainment venues, as well as general improvements to the center’s public realm, are also part of the project.

Currently, the firm is collaborating with the association on a standard that customizes stadium operations and facilities management plans.

“Typically, architects see their role as building designers and consultant managers,” says Matt Rossetti, CEO and president of Rossetti. “Our process is far more comprehensive by investigating and conceptualizing innovations in our clients’ business models in a discovery phase, then going into the actual design of the spaces.”

He says the United States Tennis Association’s rollout of new stadiums and amenities over the past five years has improved the overall experience of the center.

Rossetti has worked with the association since 1990. In recent years, the U.S. Open attracts more than 750,000 visitors. With the campus additions, the venue estimates 1.2 million annual visitors will help generate an economic impact of more than $700 million.