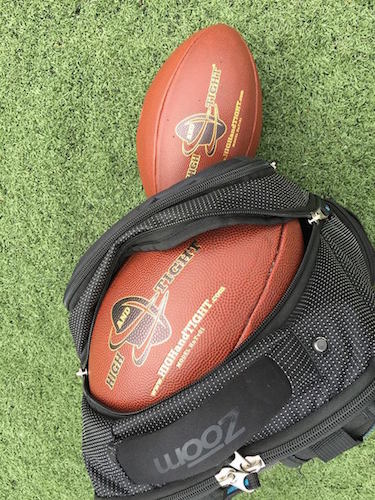 High and Tight, a beeping football created by an assistant coach at Midland-based Northwood University that is designed to prevent fumbling among players, will be used this month at several NFL training camps.

“In the world of football, (high and tight) is a term we use to remind kids of ball security. It’s a phrase that’s been around for generations,” says Tom Creguer, founder of the High and Tight football. “(The football) teaches a kid the perfect way to hold a football and close the gaps between their wrist and the ball or their elbow and their body.”

The High and Tight ball uses pressure sensors within each of its panels to detect when it is being held with equal distribution of weight. When a player holds the ball correctly — close to their chest and positioned accurately — the ball makes a sound.

Creguer says the football, which retails for $170 on the company’s website, conditions players to hold the ball correctly and avoid fumbling, which often occurs when it is held low to the ground and away from the body.

“Even if (a player) doesn’t get the sound, he’s thinking about the ball and trying to get the sound, which is more than they were doing before,” he says. “It’s a multisensory tool that changes the way we train and gives positive feedback.”

Creguer partnered with Central Michigan University Research Corp., a SmartZone funded by the Michigan Economic Development Corp., to help him get a patent, receive starter funds, scale his market, network, and produce marketing materials for High and Tight.

He says his company is looking to develop more partnerships and will educate children about proper ball handling with the addition of youth football sizes in the fall.

To learn more about High and Tight, visit highandtight.com.