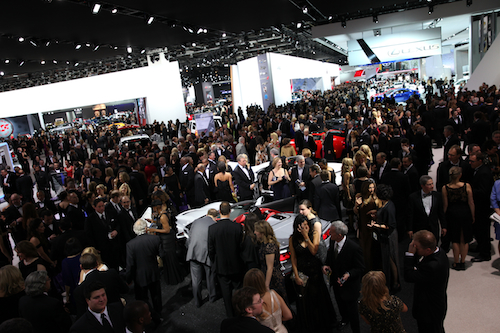 The numbers are in: More than 800,000 people attended the North American International Auto Show at Cobo Center in Detroit this month — allowing the event to claim its highest attendance since 2003, when it reached 838,066.

“This was a special show, and everyone knew it,” says Bob Schuman, chairman of the event. “The industry is healthy, the products and technology are spectacular, and confidence is high. It would be difficult to find a more exciting or more important two weeks than what we just experienced in the auto industry here on Detroit’s world stage.”

More than 13,800 people attended the charity preview, helping to raise $4.8 million for children’s charities. And Studio 25, the first ever charity preview afterglow was a sellout at 2,250 tickets inside the Grand Riverview Ballroom.

Conference officials announced Sunday that total ticketed attendance for the two-week event was 803,451 people, and had a total economic impact of $365 million

Now in its 25th year as an international event, the show continues to play a major role in automakers’ global launch strategies, says Rod Alberts, executive director of the NAIAS. “We’ve worked hard to earn and maintain their confidence and trust, and year-after-year, we support the promise of the original NAIAS ‘organizers’ who said 25 years ago, ‘You bring the cars, and we’ll bring the media.’ I think it’s safe to say we kept our promise.”