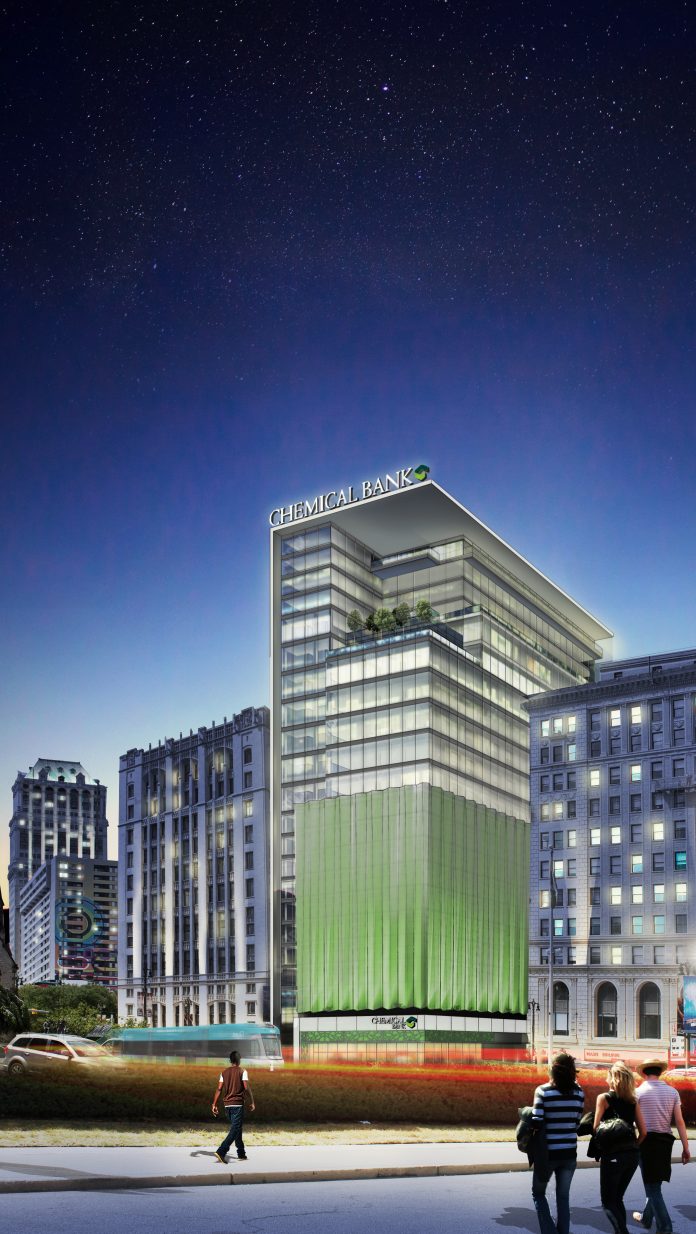 Chemical Financial Corp., the holding company for Chemical Bank, today announced it will immediately relocate its headquarters to its location in downtown Detroit at the 333 W. Fort Building. The bank was founded in 1917 in Midland.

As part of its long-term plans, the bank plans to build a 20-story office building at the southwest corner of Woodward Avenue and Elizabeth Street. The parcel, located just south of the Fillmore (State Theatre), is now occupied by a surface parking lot.

News of the move coincides with Detroit’s announcement that it has named Chemical Bank its new primary banking partner for managing the city’s operating deposit accounts, with expected balances of up to $500 million in deposits. It will provide banking services including a comprehensive suite of payment and deposit solutions, including lockbox services.

“Chemical Bank, Michigan’s largest headquartered bank, is excited and pleased to be a part of the dynamic growth and success of Detroit,” says Gary Torgow, chairman of Chemical Financial Corp. “We are honored to be in a position to bring a bank headquarters back to the city of Detroit and become Detroit’s hometown bank.”

“Chemical Bank is a great banking partner for the city’s finances and a great community partner, now headquartered in the city of Detroit,” says Duggan. “I am very excited to welcome Detroit’s new hometown bank.”

Chemical Bank has been headquartered in Midland since its founding in 1917 and grew significantly when it joined forces with Talmer Bank and Trust. The merger made Chemical Bank the state’s largest headquartered bank, with more than $20 billion in assets, about 3,300 employees, and 212 banking centers across Michigan, Indiana, and Ohio.

“Detroit is the financial hub for advanced manufacturing and mobility as well as a growing nexus for young entrepreneurs looking to leverage the city’s rich history of innovation and hard work, and Chemical Bank is excited to help them build our economy and invest in Michigan’s future,” says Thomas Shafer, president and CEO of Chemical Bank. “With our legacy markets as our foundation, Chemical Bank’s continued expansion into the Detroit market establishes us as a leading financial institution in the Midwest.”

The company plans to add more than 500 employees to the city’s workforce with the move once construction is complete. In the meantime, Chemical Bank will expand its Detroit offices at 333 Fort St.

Chemical Bank plans to retain its current Midland workforce of more than 500 and its presence in the Midland community. Midland continue to be the company’s corporate operations center.

“We are excited about our continued strong ties to Midland and believe our operational infrastructure, which is based there, will continue to benefit from our increased transaction volumes from our growth markets,” says Shafer.

In 2014, Duggan partnered with Talmer Bank before the merger to adopt the Marygrove neighborhood to help stabilize and revitalize it. The bank committed $1 million to provide $25,000 in forgivable grants over five years and committed to partner with Southwest Housing Solutions to boost home ownership and help new buyers refurbish homes in the community.

Chemical Bank has 212 banking offices and had total assets of $20.3 billion as of June 30.