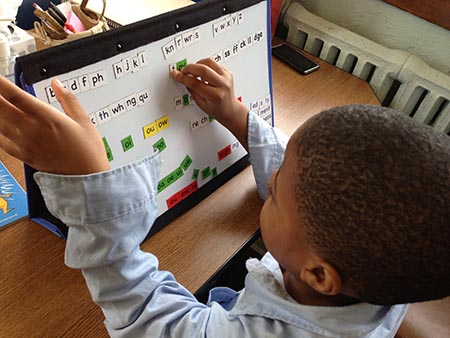 Beyond Basics, a nonprofit organization that helps improve student literacy in Detroit public schools and other educational districts, says a new report shows students from second grade to high school enrolled in its program, have seen their reading levels double.

“We are trying to do things that give kids different identities that are connected to language and words and get them excited about doing things (related to) academics as a way to keep them interested and constantly growing,” says Pamela Good, executive director of Beyond Basics.

Good says once a teacher identifies a student who has fallen behind in reading, writing, or word comprehension, the student goes to a special classroom set up in their school where they are paired one on one with a certified tutor for one hour each weekday. After six weeks of training, the success rate of getting students back at or exceeding their grade level in reading is 95 percent, on average.

“The issue of illiteracy gets lost in the broader scope of education and it really is separate,”  Good says. “We expect kids to be literate when they come to school and if we were to just tackle this problem, I think that it would really lift everything else up that is going on in education and give them the knowledge to take advantage for the other good things going on.”

The success rate and long term track record of the organization has also been recognized by the Detroit City Council — which recently awarded Beyond Basics a certificate for finding innovative ways to serve families and children in Detroit for the last 15 years.

The Come Together for Children gala will feature the student authors of the year — who will get 20 copies of their books published — as well as Bob and Vicki Liggett and Karen and Drew Pesler who are being awarded the Literacy Chair for their support — in addition to dinner, beverages, and music, according to Good. Special guests will include Brenda Jones, president of the Detroit City Council.

“The evening will celebrate student achievements, supporters, and those who continue to make an impact in our communities,” Good says.