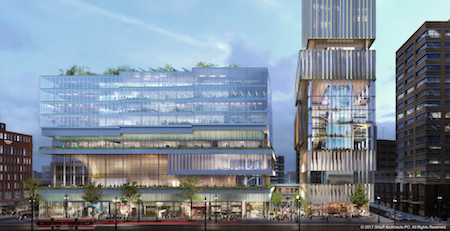 Bedrock Inc. today broke ground on a $1-billion mixed-use development on the site of the former Hudson’s Department Store along Woodward Avenue in downtown Detroit. The start of construction follows years of planning and preparation that will result in a one-million-square-foot development that will create Michigan’s tallest building at 800 feet, residences, retail space, conference centers, presentation theatres, and a skydeck.

Designed by Detroit-based Hamilton Anderson and New York-based SHoP, the development is technically two separate buildings: a 58-story residential tower at the south end of the rectangular site (bounded by Woodward, Gratiot, Farmer, and E. Grand River), and a 12-story building at the north end.

Between the two structures will be a wide walkway, bordered by a ground floor gourmet market and flexible exhibition space for a variety of events, conferences, technology attraction, and more. The tower will have a residential capacity of 330-450 units, depending on final design decisions and the size of each unit. The project will also feature 700 below-grade parking spaces. A top-floor, multi-level public observation deck will provide residents and visitors with a skyline view.

“Today downtown Detroit is officially going vertical,” says Dan Gilbert, Bedrock’s founder and chairman. “Not only do we need projects like this one to meet the significant demand for office, residential, and retail in downtown, but this development becomes the 21st century version of what Hudson’s was to metropolitan Detroit for so many decades in the 20th century.

“In addition to creating opportunities for all Detroiters, this project will put our city on the radar of world class technology companies like Amazon and others.”

The project’s scale is designed to be a destination aimed at attracting residents, visitors, businesses, and talent from across metro Detroit and around the world. Overall, Bedrock has committed $2.1 billion in Detroit through four transformational projects that include the Hudson’s site, a new mixed-use development of the Monroe Block west of Greektown, and the restoration of the Book Tower and Book Building along Washington Boulevard.

“When we hear people talk about what Hudson’s meant to them, the common theme is that it was a place where memories were made,” says Dan Mullen, Bedrock’s president. “Bedrock is fortunate to have the opportunity to create a new landmark by providing all kinds of common and public space which is much needed in our city, and will be the location where innovation and the ideas of the future germinate.”

“This landmark development will bring even more energy to Detroit and make a lasting, positive impact on our community by creating another exciting destination on Woodward Avenue,” says Ilitch. “Combined with many other exciting things happening in our community, the Hudson’s site development adds to the growth and progress of our city, region, and state.”

More information about the development can be found here.