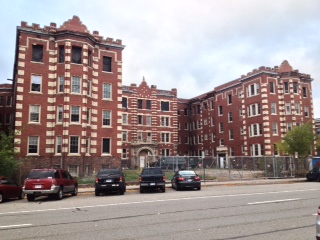 Following a devastating fire in 2008, the historic Forest Arms apartment building in Detroit’s Midtown District had been slated for demolition until developer Scott Lowell and his wife, Carolyn Howard, convinced the city that the four-story, brick-and-stone structure could be renovated.

In December, Lowell and Howard will start work on converting the structure, built in 1905 at Second and Forest avenues on what was part of the Lewis Cass farm, into 70 apartments ranging in size from 500 to 950 square feet. As part of the plan, five penthouse apartments and two commercial spaces totaling 7,000 square feet of space will be part of the project, as well.

“It took multiple calls, and we took the time to secure the building, and in the end the city agreed with us that such an important structure in the neighborhood should be saved,” says Lowell, principal of Pied-A-Terre Inc. in Detroit. “Midtown Detroit Inc. and Sue Mosey (president) were incredible advocates, and it really shows you the power of camaraderie and dedication.”

The units — rent will range from $600 to $1,200 per month — will include modern kitchen layouts, ceramic tile bathrooms, wood cabinets, and transom lights over the bedroom doors. In addition, the building will offer a geothermal heating and cooling system, solar panels to preheat hot water, and rainwater collection systems.

The renovation is projected to be completed in fall 2015. Given strong demand for musical rehearsal space at Lowell and Howard’s nearby Traffic Jam and Snug Restaurant, the team plans to install a soundproof practice room in the lower level of the Forest Arms. The courtyard also will be landscaped.

Overall, Pied-A-Terre owns and manages nine residential buildings offering a total of 92 apartments in Midtown. Along with Howard’s brother, Paul, the trio own The Bronx Bar in Midtown and Cliff Bell’s in downtown Detroit.