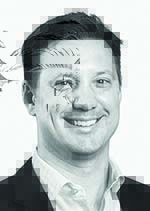 On the outside, it sure seemed like Ryan Holdan had it made. He was a recent graduate of an Ivy League college, in his early 20s, and living in Santa Monica, Calif. “I was right there on Ocean Avenue,” he recalls, “right across from the Pier. I could see it from my window.”

Holdan was working for CIBC World Markets, the investment-banking branch of a global Canadian bank.

“They were big into casinos,” he says, “and I was in the gaming, lodging, and leisure industry. The money was awesome, the hours were horrible.”

It wasn’t long before Holdan learned something about his job — and himself, too — that caused a change in his career path.

“There’s a pecking order in corporate America, and that really wasn’t something I wanted to do the rest of my life. I thought investment banking was going to be the greatest thing that ever happened to me, but I realized what I really wanted to do was to start my own business. I wanted to live and die by my own sword,” he says.

So Holdan literally moved back into the Bloomfield Township house of his youth. “It was a little bit humbling, sure,” he says, “but I was young enough to take the plunge and I saved every penny.”

Holdan started Paymasters Inc. when he was just 25, and since then he’s taken what was a modest payroll company and turned it into a growing enterprise in the industry, largely by cornering a very specific client — restaurants.

“This is more fun than just normal payroll; it’s more complicated and challenging. We like to think of ourselves almost as an elite team. We have special software just for restaurants, and we spend gobs of money doing everything in our power to educate and train our clients and ourselves so we can help them stay in compliance.”